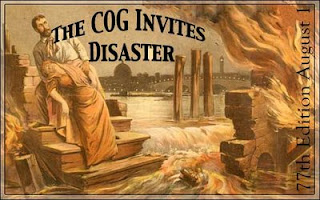 Into every life a little rain must fall. Unfortunately for some that rain is accompanied by a hurricane, tornado, or lightning.

The topic for the 77th edition of the Carnival of Genealogy is: disasters that our families have lived through. This is about the folks for whom the rain in their lives was torrential or the snow a blizzard as the case may be.

My great grandparents immigrated to the U.S. in 1881 (my father's mother's branch of the family). My paternal grandfather came in 1905 and my maternal grandfather and grandmother came in 1912 and 1913 respectively. They all lived in Poland prior to their immigration to the U.S. and I don't have a clue how to research disasters in Poland from the 19th century or earlier, especially since I don't speak the language. My grandparents and great grandparents all lived in the Detroit, Michigan area and so did all their children and grandchildren. So for the most part, I can only research what disasters might have befallen them in the last 100 years in Detroit.

There are only about three dozen articles on the GenDisasters web site that pertain to Detroit in the last 100 years and none of my family members are mentioned in any of them. However, there are a couple blizzards that my great grandparents lived through and I guess those would qualify as disasters.

In April of 1886, just 5 years after my great grandparents came to Detroit, the city experienced a blizzard the likes of which had not been seen before. The freak spring storm occurred on April 6 and began just after midnight. By 7am the snowfall measured 4.6" in nearby Rochester, by 3pm there were 17.1" on the ground, and by the time the snow stopped falling at 9pm there was a blanket of 24.5" of snow there. "Twelve-foot high drifts and snow in the street that totaled 10" to 40" were common throughout southeastern Michigan."

I have no idea how my family members coped with this blizzard but none of them died in it so they must have found a way.

There was another blizzard that must have effected them on February 9, 1895. The huge storm effected folks from Iowa and Kansas to Massachusetts and Florida and most all the states in between. I don't have details as to the amounts of snow or the wind speed but from what information I have read the storm was a doozy.

Again, I have no idea how my family members dealt with this storm but none of them perished in it.

The one other disaster that may have effected my family involved a train wreck that occurred about 60 miles NE of Baton Rouge, LA on August 10, 1951. A U.S. Marine transport train ran head on into a passenger train. Eight people were killed, 60 injured. One of those killed was Marine Cpl CHESTER LOUIS LIPA, 21, of Detroit, Michigan. I believe that Chester was a family member of mine but I don't have what I feel is conclusive evidence of that. I mention him and this tragedy here in hopes that anyone reading this who has documentation of Chester's parents will share that with me. (imjasia at yahoo dot com) 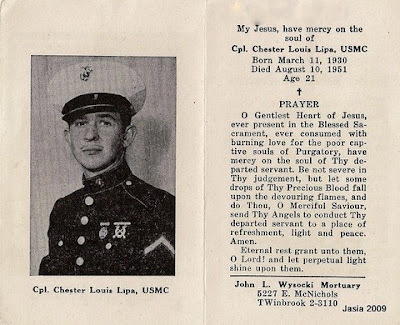 COG Poster (from footnoteMaven.com) Thanks!
Posted by Jasia at 10:37 PM