Oh What a Summer It Was!

It was the summer of 1972... the Vietnam War was raging, the Watergate Scandal was happening, the Eagles released their debut album, Bob Seger was Smokin' OPs, hot pants and halter tops, tie dye and peace signs were all the rage, and I was 15 years old.

It was a summer of many firsts for me.

The summer started on Memorial Day weekend. I went up to Houghton Lake, Michigan with my best friend Valerie and her parents. They'd rented a cottage for the weekend and as I recall the weather was wonderful. We swam in the lake and met some really cute guys from Bay City who were really good water skiers. They told us they were on the U.S. Olympic water ski team and we believed them! Oh, we were so naive. I remember going boating with them and hanging out on the dock in the evenings. I remember the joint they passed me and how amazed I was that these otherwise normal looking guys would smoke dope. It was my first exposure to illegal drugs and I'd been under the impression that all drug users would look strung out. Like I said, I was so naive.

Here's a picture of Valerie and I from that weekend at Houghton Lake. (That's me on the right.)

School ended in mid June and I got a call from a friend, Kathy, who lived in Hastings, Michigan. Her mother and my mother were best friends back in high school and up until they got married in their late 20s. From that point on they pretty much just exchanged Christmas cards. Anyway, Kathy was a couple years older than me and had 2 sisters, one the same age as me and one a couple years younger. The three girls were going to a summer cultural program at Alliance College in Cambridge Springs, PA sponsored by the Polish National Alliance and they invited me to go along. It was a month long program (the month of July) that taught Polish dancing, history, and language. They'd been to the program previously and had really enjoyed themselves. Most people my age might have wrinkled their nose at such an invitation but Kathy was so zany that I knew if she liked this program it must be fun. Oh, I was so naive. It turns out it wasn't the program that was so much fun...

Much to my surprise, my parents were fine with the idea of sending me off to this program they'd never heard of hundreds of miles away. Since I'd never gone to summer camp, it would be the first time I was away from my home and parents for any length of time. And it would also be my first time flying. I liked the idea of living in a dorm like college students (I was always in a hurry to grow up). So I was game to give it a try.

I remember feeling so grown up when the 4 of us girls boarded the plane without our parents. I don't remember the flight too well except that that it felt like being on a bus, heavy and bouncy. We were met by some of the program counselors when we landed at the Erie, PA airport. They drove us to the college campus and got us checked into our rooms. Kathy was my roommate. Her two sisters roomed together. Our rooms were on different ends of the same floor.

One of the first things the girls told me was that the really cute guys lived in town and were referred to as "townies". I don't remember how far a walk it was from the campus to the town but I'm going to say a half mile or so. We were allowed to go there during free time as long as were back in our dorms by 9:30pm. The doors were locked at 10pm.

Our days were filled with classes... language classes, history classes, and dance classes. At the end of our stay we would put on a show for those parents who came to pick up their children. On the weekends we went on field trips around the area. One time we went swimming in Lake Erie, another time we went to Hersey, PA. I enjoyed most of it (not so much the Polish history) but nothing was as much fun as the townies! (Here's me in my Polish dance attire in the dorm at Alliance College.) 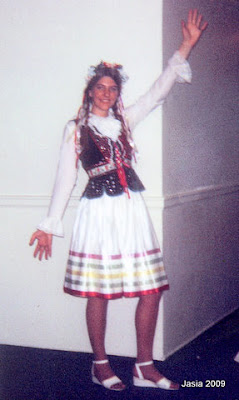 There was one guy in particular (a townie of course), Rick, who I really liked. I met him early on and we became fast friends. The three sisters all made townie friends too. Anyway, Rick introduced me to the game of baseball, if you know what I mean. One time I played a little too long and didn't make it back before curfew. In fact, I didn't make it back before the doors were locked. So I had to knock on the front door to get someone to let me in. Which resulted in having my parents called and getting banned from going to town for 3 days. Ooops! (It was worth it ;-) Here's me and Rick pictured below. (Sorry, this is a good as this picture gets :-( 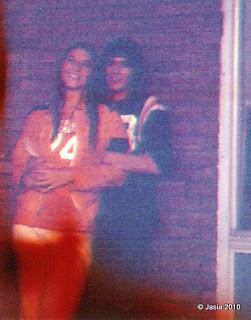 Our assigned counselor was a gal by the name of Josie who lived in nearby Erie. She was the one responsible for getting us back to the airport in time for our flight. We all liked Josie. She was really a nice person. Too nice really. Too easily manipulated. And unfortunately we girls took advantage of Josie's niceness. We begged Josie to let us make one last trip into town to say good bye to our town friends before we left campus. Of course she said, OK. And then we stayed too long with the townies and by the time we got back to campus it was too late to get back to Erie in time to make our flight. Ooops! We stayed the night sleeping on the floor at Josie's parents' house and took the same flight the next day. (It was worth it ;-)

I have a great picture of me with my friends on a dock in Erie the day we missed the flight back home. Unfortunately it's on my other computer back home and I can't put my hands on it. :-(

While I was at Alliance College, I got a letter from my best friend back home, Valerie. In the letter she told me she was going on a trip to California with her parents the middle of next month, August, and I was invited to come along. They would be driving across country, for three and a half weeks, and we'd have to miss the first week of school. Oh man did that ever sound like fun! But I knew my parents would never go for it.

We left on my first cross country trip, the dream trip, in the middle of August, I don't remember the exact date. Valerie and her parents had been to California before. In fact, they'd lived there for a time and Valerie was born there. They had family there.

I remember only bits and pieces of the drive... crossing the Mississippi River, seeing the Arch in St. Louis, seeing the extreme poverty in New Mexico (worse than anything I'd seen in Detroit), marveling at the red tile roofs and adobe homes in southern California and seeing real flowers planted along the highway there too (they didn't do that in Detroit!). I remember thinking how clean California was and how beautiful.

We stayed at the Mountain Shadows Resort in Phoenix, AZ for most of a week. That's when I first started coloring my hair. I'd been a blond as a child but my hair had darkened to a dingy dishwater blond by that time. So I helped it back to it's original color with some Sun In, a spray on chemical that lightens hair with sun exposure. I also surfed for the first time at a wave pool in Phoenix. And I was kissed (steamy-kissed) for the first time by an adult male several years older than myself, the lifeguard at the resort's pool (Oooh la la!), for which I received a scolding by Valerie's dad. :-7 I didn't know anyone was looking! Ooops! 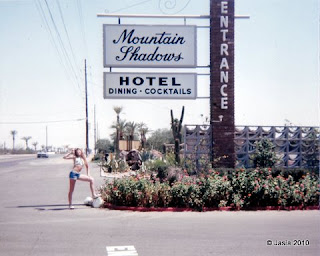 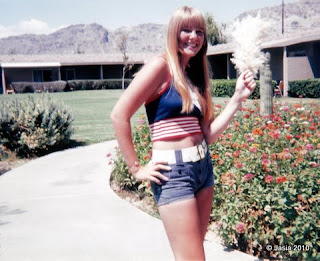 Me at Mt Shadows
From Phoenix we went on to California to visit with their family. We stopped somewhere south first (Laguna Beach?). Then we visited family in Santa Barbara and San Jose, where I ate granola for the first time. I'd always loved the Beach Boys music and I drove everyone nuts playing it over and over again while I was in CA, imaging myself to be a surfer girl and hanging with surfer guys. Sigh. I thought I was so cool being a Midwestern girl in CA! 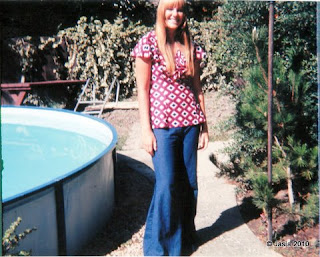 Me looking California-cool in Palo Alto!
I don't remember seeing any tourist sites while we were on that trip but I'm sure we must have. I don't remember anything about the trip back, but I do remember feeling pretty cool to be starting school late because I'd been hanging out in California. Totally Rad, Dude! It was the first time I'd missed the first day of school in my life.