Commemoration of the 70th Anniversary of the Invasion of Poland 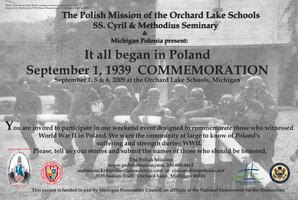 Paint By Number kits under the Christmas tree during the 1950s. But how many know Detroiter Adam Grochowski, who created the canvases, was a Concentration Camp survivor? His life was spared by the Nazis in exchange for creating artwork for their girlfriends. Adam's story is a quiet testament to his Roman Catholic faith and the restorative power of the creative spirit. Imprisoned at the age of 18, he spent the war in two of the most infamous concentration camps, Auschwitz and Mauthausen; then five years in a displaced persons camp in Regensburg, Germany.

The Polish Mission on the campus of Orchard Lake Schools will host an exhibit of his work presented by his widow Peggy Grant. It is part of "It All Began in Poland", a Commemoration of the 70th Anniversary of the Invasion of Poland this Labor Day weekend September 5-6, 2009. The event is designed to share Poland's history and the campus World War II museums with the citizens of Michigan.

The Arts, including poetry, painting, music, dance, and sculpture, tell the story of Poland's suffering and strength during WWII. This project is funded in part by Michigan Humanities Council, an affiliate of the National Endowment for the Humanities; the guests of honor include the Polish Veterans, Polish Survivors, Children in Exile, and Displaced Persons. Thousands came to Michigan after the war to begin their lives anew. The community at large is invited to meet these eye witnesses of the war in Poland. Continuing Education Workshops for Middle and High School teachers will be held before the general sessions begin on Saturday and Sunday.

We are honored to have Mrs. Barbara Klich-Kluczewska PhD Jagiellonian University- Institute of History (Krakow, Poland) and Mr. Zygmunt Matynia, Consul General of the Republic of Poland (Chicago) join us for the events on Saturday and Sunday.

Throughout the weekend there will be ongoing activities including:
"Batilion Burza" a living history re-enactment group, Assembling a "Time Capsule" - Collection of WWII and commemoration materials to be opened in 2039, the Time Capsule will be registered with the Smithsonian Institute. Personalization of "Pewabic Memorial " with signatures of Polish Veterans and Displaced Persons, and "Księga Pamiątkowa" - Guest Book Signing. Additional details are online at: www.polishmission.com and http://1sept1939.eventbrite.com.
Posted by Jasia at 3:48 PM