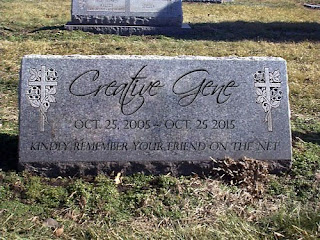 I'm not really retiring the Creative Gene blog. This post was written for the 81st edition of the Carnival of Genealogy. The topic is: Your blog's obituary. I don't have lofty ambitions for this blog so what I imagine I'd say about it 6 years from now is pretty much the same as what I'd say today...

Creative Gene is laid to rest. After a successful run of 10 years, Jasia has decided to end her writing adventure. She started Creative Gene as a writing exercise back in 2005 with the intention of improving her writing skills. It was inevitable that she would write about her hobbies genealogy and photography at some point, but it wasn't long before they became the primary focus of her blog. There weren't a lot of other genealogy blogs on the 'net at that time but she found a few and made some connections with other bloggers. Jasia learned a lot about genealogy and about blogging from reading their blogs. And Creative Gene was all the better for it.

Roughly 7 months after Creative Gene began, it gave birth to the Carnival of Genealogy. Jasia could see the merits of having an online platform for genealogy topics and hoped that she could sell the concept to some of the other genealogy bloggers she'd made connections with. In the beginning, she did it all by herself. She didn't write all the articles but she went out and found several articles on a given topic for each edition. Eventually, the idea caught on and others began writing articles and submitting them to the COG. It's popularity grew beyond her wildest expectations and was written about in national genealogy publications. The COG also appeared on the recommended reading list for at least one collegiate history course. Over the years, the COG grew and experienced a few changes. The result was an even better quality publication. The COG more or less put Creative Gene on the map of the genealogy blogosphere but Jasia hopes it is not all that Creative Gene will be remembered for.

Jasia has always been proud of her Polish heritage and tried to keep Polish and Polish-American themes an ongoing part of Creative Gene. It was an integral part of her family history after all. She also shared her research experience with other genealogy researchers in hopes that they would enjoy the success she did in researching her own family history.