It all started with a holy card (funeral card) that my dear cousin ME sent me. This is the card of which I speak. One year ago today I wrote Won't You Help Me Honor This Veteran? and asked for help researching military records. 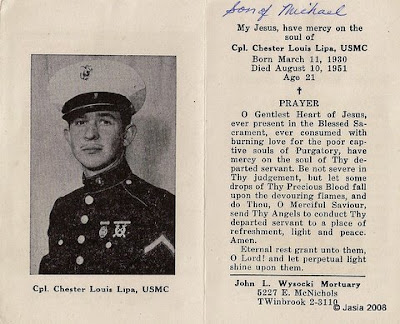 As you can see, the card is a memorial to Chester Louis Lipa. Chester died at a young age while in the military. The thing that caught my interest was the handwritten notation on the top, "Son of Michael". I pondered that and then checked my Legacy database. Sure enough, my Granduncle Michael Lipa had a son named Chester. The problem was, Chester shows up in the 1920 Census as being a year old while the Chester of the holy card wasn't born until 1930. Obviously this was a different Chester Lipa, one I didn't have in my database.

I've written about Chester Louis Lipa a couple times over the last year as I've tried to figure out where he fits on my family tree. The holy card was passed down to ME from her mother and probably originally belonged to her grandmother, my dear Grandaunt Josephine Lipa Ronowski (my father's Godmother), who I've also written about before. So there was no doubt in my mind that there was a family tie to Chester. I just had to figure it out.

I got some help from dear online friends Tex and Chris Dunham (thanks again guys!) who helped me get started. Chris discovered that Chester was killed in a train wreck and sent me a link to the index for Lousiana Death Records :-) . And Tex sent me a couple newspaper articles describing the train wreck. I learned the names of Chester's parents, Stanley Lipa and Anna Sulima, from these sources but discovered they weren't in my database either. Or were they?

I did have a second cousin twice removed whose name was Stanley (Stanislaw) Lipa and he was the right age to have a son born in 1930. I didn't have any other information on him though. So I did some online searching and found a few bits and pieces of information here and there, and potentially a "new cousin" in Virginia if in fact I could tie Chester in to my family tree. My dear friend Waleria did an obit lookup for me at the Detroit Public Library (thanks Waleria!) which gave me more bits and pieces. But try as I may I couldn't find conclusive evidence that proved that my second cousin twice removed, Stanley Lipa, was the same Stanley Lipa that fathered Chester Louis Lipa. What I needed was the marriage record of Stanley Lipa and Anna Sulima because that would name Stanley's parents.

So after exhausting all my other options, I wrote out a check to the State of Michigan for $26 and requested the marriage license of Stanley and Anna. I'm not a cheap person, but I would go bankrupt if I wrote out those checks for everyone of my second cousins twice removed, if you know what I mean. ;-)

The marriage license came in the mail a few weeks later and I finally had the evidence to prove a relationship. The Stanley Lipa who fathered Chester was in fact my second cousin twice removed, making Chester Louis Lipa my third cousin once removed.

So now that I've established the family tie, I'm honored to share with you what I've learned about my cousin, Chester Louis Lipa.

Chester was the first of two sons born to Stanley and Anna Lipa. He was born on March 11, 1930 in Detroit, Michigan. His younger brother Anthony was born nine years later on August 2, 1939. The family lived at 2314 Whalen Street in Hamtramck, Michigan when Chester was born. It was right in the heart of a solidly working class Polish neighborhood.

I don't have any information on Chester's grade school years. If the family continued living in Hamtramck, it's likely they would have attended the nearby Holy Cross Polish National Catholic Church or St. Ladislaus Roman Catholic Church. However, at the time of Chester's death in 1951, his parents were living at 11151 Findlay in Detroit and the family could have moved several times in between.

Chester attended the Holy Cross Missionary School at Watertown, Wisconsin and planned to enter a seminary in Milwaukee. He joined the US Marine Corps in 1948. He served a year and then took a job in the office of the Chrysler Corp. Jefferson Ave. plant. He was recalled to active duty in December 1950 and was working as a clerk in battalion headquarters at Camp LeJune, North Carolina just prior to the train accident that would take his life. Two days before Chester died, his family received $30 of his Marine Corps pay to be saved for his education as a priest along with a short note indicating that he was bound for San Diego, California and then on to Korea or Japan.

Corporal Chester Louis Lipa was one of two Marines killed when the troop transport train he was riding in (carrying 300 Marines) crashed head on with a passenger train near New Roads, Louisiana (60 miles NW of Baton Rouge) about 7 a.m. August 10, 1951. The passenger train had left Kansas City a day earlier and was southbound for New Orleans. The troop train was heading northbound out of New Orleans on route to San Diego. Newspaper accounts at the time reported a good deal of confusion with varying counts on the number of dead and injured. Some bodies charred beyond recognition (including Chester's) were not recovered and identified until the next day. In all, it seems that 8 people lost their lives and some 30 others were injured. One of those killed was a young boy of 8 who was hit by a car while riding his horse on the way to see the train crash.

A June 2009 Newsletter of the Midwest Province of the Brothers of Holy Cross, lists Jubilarians celebrating their years of religious life. The five 60-Yr Jubilarians would have been colleagues of Chester at the Holy Cross Missionary School in Watertown, Wisconsin. If not for the train crash on that fateful day, we might be reading about Chester's life on those pages as well.

Rest in peace, dear cousin. I wrote this in your honor, on this Veteran's Day, that you may live on in the hearts and minds of your family, friends, and those who never knew you. 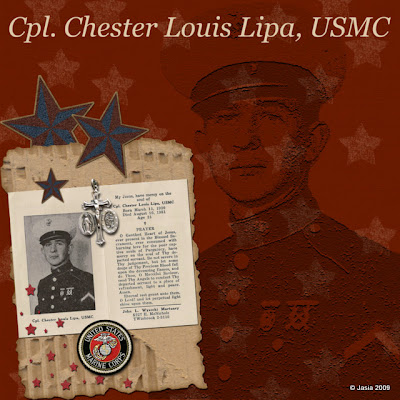