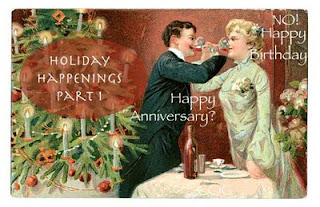 How many people on your family tree have December birthdays or anniversaries? I didn't know the answer to that question off the top of my head so I ran a search in Legacy and here's what I discovered...

Anyway... back to those December babies, brides, and grooms.

I'm not going to list the names of living family members with birth dates in December because they probably wouldn't appreciate me broadcasting their names here on this blog. But here is a list of 24 of those 60 family members, now deceased, who were born in December.

Of the 13 family members who were baptized in December, those now deceased are:

The 4 family members who were born and died in December were:

Of the 4 couples who were married in December, only one couple is now deceased. That would be Marianna Laska and Jozef Czech who were married on December 28, 1906 in Podborze, Poland. (Marianna was my 1st cousin 3x removed.)

To all of my family members, those living and deceased, who have/had birthdays or anniversaries in December... I'm thinking of you this December and wishing you a