Whose Valentine Was She? 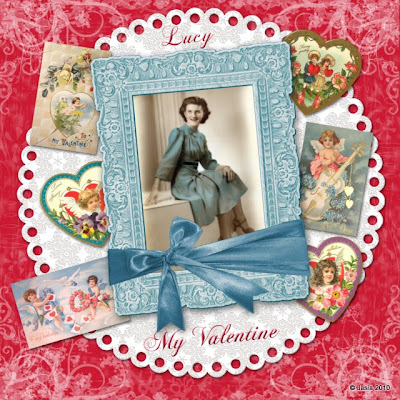 This is picture of my mom back in 1941. She was 22 years old. It would have been the year before she started dating my dad. I'm thinking her Valentine back then might have been Mike...

[From "A Gift of Memories From Grandma"] Who is the boy you remember most? "Mike. I went out with him for 2 years. He was not Catholic. My dad objected. After I was married my dad saw him a few times. He thought Mike was the greatest guy, but I never saw him again." ~ Lucy

It's amazing what a grandparent will share with a grandchild.

I know I asked my mom about her boyfriends back when I was a kid but she'd always give me an evasive answer. "Oh, I dated lots of fellas but I wasn't serious about any of them.", was her favorite response.

Then when my kids were in grade school I bought 3 of those "Grandparent Books". You know the kind, they look like a glorified pamphlet with a couple questions on each page and a half dozen blank lines squeezed together for a response. My mom filled out one, as did my mother in law. I gave one to my father in law too but I guess he wasn't interested. He never filled his out.

Anyway, my mom filled hers out almost completely and gave it back to me. I remember looking through it briefly at the time, thinking, "she never told me that!" over and over again.  Then I filed it away. I don't know why it didn't occur to me to ask her about Mike back then but it didn't. After my mom died, in April 2007, I came across that book again. I read every page and was amazed at how much she'd shared with my kids that she had never shared with me.

If my mom had any photos of Mike, she never showed them to me. But then, my mom kept her share of secrets. She was quick to clam up when she didn't want to answer a question or she would reply, "Never you mind". One day when my brother went over to visit her he found her in the basement burning what looked like photos or documents in the wash basin. When he asked her what she was doing she replied, "Just getting rid of some things", and changed the subject. She liked her secrets.

My parents had a troubled relationship, which is another way of saying my mother was the victim of my father's physical abuse. I'm sure my grandparents must have known my mom was not happy in her marriage. I can't help but wonder if my grandfather ever regretted that he kept his daughter from marrying such an upstanding guy as Mike. Oh what I wouldn't give to know Mike's last name so I could look him up and see what ever became of him. But that's another of the secrets my mom took to the grave with her.

As Valentine's Day rolls around I'll be thinking about my mom and wondering, "Whose Valentine was she in 1941..."