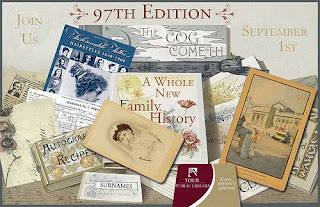 I’ve probably mentioned before that all of my ancestors came from Poland, and they all came during the 1880-1925 migration period. Only 2 of my 4 grandparents were here in the U.S. a hundred years ago. All 4 of my grandparents settled in Detroit, Michigan when they first arrived in the U.S. and none of them ever moved beyond the city limits. Furthermore, 3 of my grandparents lived within 45 miles of each other in Poland before they immigrated to the U.S. So you can see how all of my genealogy research has had a very narrow focus.

Given that set of circumstances, I’ve done relatively little research in U.S. records compared to my genealogy friends who can trace their ancestors back to the Mayflower. Pre-1900 U.S. Census records... never saw one. Civil War Pension Records... nope, none of those either. Probate or land records. Zilch, zip, nada. Now Catholic church records I’ve seen aplenty, both in the U.S. and in Poland. But I’ve long been envious of those who get to research records written in the English language as opposed to all the Polish, Russian, and Latin records I’m used to. I chose the topic for COG #97 (3-5 hours of online research on someone not related to you) based on my desire to try my hand at researching some good ole American records. Here’s what I’ve discovered...

It’s not easy in English either!

The information provided to me for my research project came from a friend. His great grandfather was Jewish and his great grandmother came from the south. Oh boy! Totally different research than I’m used to! I had visions of finding his family members in Holocaust survivor records and in stories of Civil War battles. The following information was provided to me: His grandfather, Charles Goldwater, was born in Michigan in 1941. He didn’t know when or where he died. Charles’ parents were Solomon Goldwater, born in 1909, place of birth and date and place of death unknown, and Hattie Mae Tyler, born in 1905 and died in 1995 in Michigan. He didn’t know for sure where Hattie Mae was born but she was “from Tennessee” and was believed to have married Solomon Goldwater there. Marriage date unknown.

With that information, I started my research on Ancestry.com. I was hoping to find a census record listing Solomon and Hattie Mae Goldwater (Charles, born in 1941, was too young to be found on a census record but he could have had older siblings). No such luck. I did find a Solomon Goldwater in the U.S. Border Crossings collection who was born in 1907 in Canada and came to the U.S. in 1923 with his mother and siblings. I thought that might be promising, made a note of it, and went on to look for more records. I looked through the census records but didn’t come up with anything. Nothing in the SSDI either. I did see the alternative spelling of “Goldwasser” for Goldwater and made a note of it. However, there weren’t any Solomon Goldwassers born about 1909 in the census records either. Jeez. I hate when that happens.

At that point I decided to give Hattie Mae Tyler a try. I put her name in the search box at Ancestry.com to see what I could come up with. I found a few Hattie Mae Tylers in the census record collections born about 1905. The problem was, none of them were in Tennessee, and almost all of them were listed as black. Our Hattie Mae Tyler wasn’t black. I tried just entering “Hattie Tyler” but that generated pretty much the same information. The most common near spelling was “Taylor” instead of Tyler. I’m not an expert on southern drawls but I’m thinking “Taylor” could easily be mistaken for Tyler by a census taker. I made a note of it and went on looking for records on other web sites.

I found Hattie Mae Goldwater on the RootsWeb SSDI. Finally some new info! Now I had her date of birth and date of death. Her SS # was issued in Michigan, place of birth not given in the online database.

Next stop was FamilySearch.org. I put in Solomon Goldwater, Charles Goldwater, and then Hattie Mae Tyler and Hattie Mae Goldwater. Nothing promising for those names. On to FindAGrave.org.

A search for “Goldwater” on FindAGrave didn’t give me Solomon but it did give me Charles. I’m certain it’s the right Charles Goldwater because the person who created the record (not related to Charles) included the death notice which named Charles’ children. The living children’s names matched the names I was given by my friend. Charles Goldwater died in Oceanside, San Diego County, CA in 2002.

On to Joe Beine’s Online California Death Records and Indexes page. I put Charles Goldwater into all the databases that made sense but didn’t come up with any new clues.

Back to Ancestry.com, this time in search of Charles Goldwater. I found his SSDI listing with his first name misspelled as “Charales”. I didn’t find Charles in the military, immigration and travel, newspapers, photos and yearbooks, stories, tax, or reference collections, but I did find several addresses for him in Utah and California for the years preceding his death in the directories collection.

I tried another search for “Goldwater” born in Michigan + or - 5 years of 1909 hoping once again to find Solomon on a census record. I found a “Lewis S Goldwater”, just a year old, on the 1910 census in Detroit and wondered if the “S” might stand for Solomon. His father’s name was listed as “Ann”. OK, that makes no sense. I’ve heard of “A Boy Named Sue” but not Ann ;-) I clicked on the image but couldn’t read the handwriting. So off I went to Heritage Quest to cross check the name they have for Lewis S’s father. I couldn’t read the handwriting on the image there either but the person who transcribed it called it “Solomon”! Aha! Now we’re getting somewhere. Where? I dunno. The mother’s name is listed as Louisa and Lewis S is their only child. I went on to check for the family in the 1920 census and found them listed as “Sol” and “Lena” Goldwater and son “Lewis” still in Detroit, no other children. I also found this family on the FamilySearch.org site but not on Ancestry.com. In the 1930 census, Sol doesn’t appear. Lena is listed as the head of household and Lewis is now Louis. No other children or boarders. Could this Lewis have taken the name Solomon? Inquiring minds would love to know!

I could think of quite a few more web sites to check for information but at this point I’d put in 6 hours of research time. Much as I wanted to go on, I thought it best to wrap up the research and write up this article. I’m no where near those Holocaust survivor records or Civil War battle stories I envisioned. Of course I didn’t expect to get that far in a few hours of online research. But I can’t even find census records for Solomon Goldwater or Hattie Mae Tyler or the names of their parents. I did learn Hattie Mae’s birth and death dates and the date and location of Charles Goldwater’s death. But that’s about all I have accomplished in 6 hours of online research.

I’m sure I’ll take this research further at some point. Ordering Hattie Mae’s social security app may give me her place of birth and/or her parent’s names. But then again, maybe not. I’m not sure where I’ll look next for Solomon. This has been a fun but frustrating bit of research. I had hoped to accomplish so much more in 6 hours, lol! Oh well, it was fun while it lasted!
Posted by Jasia at 9:06 PM