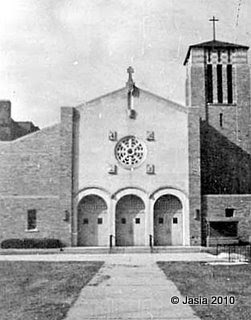 Resurrection parish offered itself as a refuge and worship center for newly arriving Albanian immigrants.

Resurrection Church is now a Mosque - complete with a Half Moon where the Cross was.

The Souvenir book of the tenth anniversary of the founding of Resurrection Parish, 1921-1931 has been cataloged and is searchable on the PGSA web site.

Some information from, "The Polish Roman Catholic Churches of Metropolitan Detroit" by PERC. c. 1985. Used with permission from Michael Krolewski, editor.
Posted by Jasia at 1:26 AM