Catholicism and Religious Rites in My Family

I come from a long line of Catholics. A very long line. As far back as I can trace my direct line ancestors, there are Catholics and only Catholics. This isn't surprising, really, since all of my ancestors hail from Poland... one of the most Catholic countries on this planet. Catholicism is a common thread that connects me to those who came before me as much as DNA does, at least as far back as 966 when Poland officially adopted Latin Christianity anyway.

Catholicism is what I think of as a "rich" religion. It has many, many layers and many, many rites/rituals. If you've ever seen photos of the Vatican in Rome, Italy, you've seen how much the Church values art, architecture, and pageantry. There are processions on holy days (kinda like religious parades), feasts on saints' days (not so much banquets as featured specialty foods and "celebrations"), and of course there are the holy days that have entire seasons... Lent/Easter and Advent/Christmas. All of this is in addition to the prayer options... Masses, Novenas, Stations of the Cross, Vespers, Rosaries, et al. which have their own rituals associated with them. Some of these can be observed in a private way but for the most part they are intended to be observed by the whole church family as a group.

When it comes to personal religious rites, the Catholic church has basically seven: Baptism, Holy Communion, Reconciliation (confession/forgiveness), Confirmation, Matrimony, Holy Orders, and Anointing of the Sick. I'm not going to go into an explanation of all seven here but I will touch on how these rites relate to my family's history. If you're interested in learning more about the seven "sacraments", as Catholics refer to them, you will find a basic explanation on Wikipedia.

Baptism
In "the old days", children were baptized as soon after birth as possible. In rural Poland, that generally meant the same day or the next day. Infant mortality was high so children were baptized quickly in hopes that should they die their souls would get to heaven. Around the turn of the century (1900), when modern medical practices reduced the risk of infant mortality, the time between birth and baptism lengthened. Medical advances happened here in the U.S. before they appeared in Poland. Here are some examples of how that played out in my own family.

I was baptized 5 weeks after my birth. 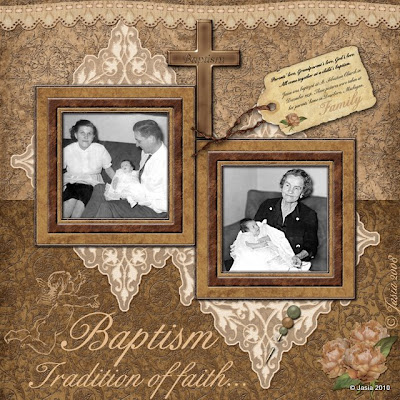 Holy Communion/Reconciliation (These go hand in hand)
I have no records to substantiate when my great grandparents, or my ancestors before them) received First Holy Communion. However, my understanding is that before 1910 (in the U.S., anyway) children were confirmed at the same time they received their First Holy Communion (see here). I have seen the Confirmation Book at Sweetest Heart of Mary Church and found my grandmother, Karolina Lipa, among those confirmed in 1910. She would have been 11 years old at the time. I had a brief conversation with the Pastor of the church and he told me that back then the children of the parish did receive their First Communion at the same time they were confirmed.

From about 1910 on, children have received the sacraments of First Holy Communion and Reconciliation at about 7-8 years of age and Confirmation at about 12-14. That's here in the U.S. I don't know at what age these sacraments are administered in Poland.

Here in the U.S., making one's First Holy Communion is cause for celebration. I'm not sure if I have more First Communion photos in my collection of family photos or wedding photos. It's close. First Communions in the Polish community (and in my family) were usually celebrated with big parties, gifts, and a trip to the portrait studio. I have more First Communion photos than vacation, birthday, graduation, Baptism, Confirmation, or Christmas photos. Girls always wear white dresses with a veil. Boys wear a suit and tie. It's a big deal. 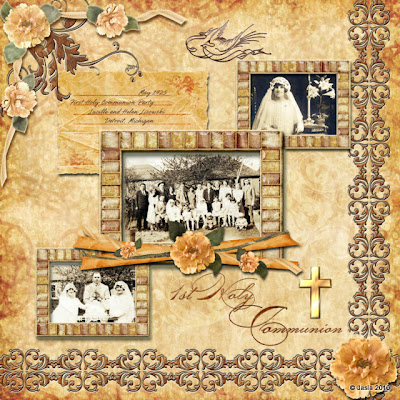 Confirmation
I don't know a lot about the Confirmations in my family. Confirmation wasn't celebrated the way First Holy Communions were. I don't even remember a lot about my own Confirmation. It was performed by a Bishop as opposed to a parish priest (Confirmation always is). I wore a fancy pastel dress. My cousin Marlene was my sponsor. And I chose the name, Barbara (you always get to pick a new name). I was 13 years old. I don't remember any parties or gifts or even going out to dinner. That's all I remember.

Matrimony
I have a gazillion wedding photos in my collection of family pics. I'm pretty sure that all of my ancestors in Poland were married in a church wedding. I don't know if civil wedding ceremonies even existed in Poland in days of old. Many of my family members here in the U.S. were married in the Catholic church as well, but not all of them. My grandparents, who were the first immigrants to the U.S., married at Sweetest Heart of Mary Church in Detroit. Some of their children married in the Catholic faith but others chose to elope and have civil ceremonies. I have many wedding photos of those who married in the church, none for those who married in civil ceremonies. 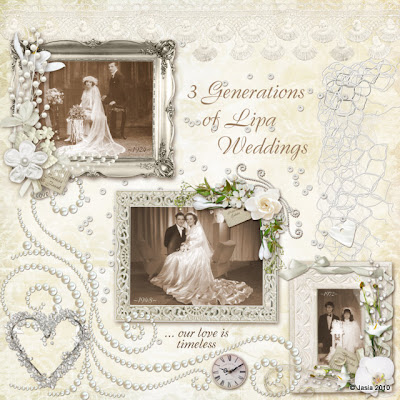 Holy Orders
This sacrament is reserved for those who become priests, deacons, and bishops. To my knowledge, there is only one priest in the family. My second cousin Pawel, same age as me, is a priest in the Cathedral in Łódż, Poland.

I would say that Catholicism and the rites and rituals that go along with it are the fabric of my family history. The location of the church may change, the individuals involved certainly did, the timing of the rites did as well, but the rites themselves really hasn't. Not since long before records were kept for such things.
Posted by Jasia at 9:16 PM