Tools, Treasures, and Trash, My Dad Was One of a Kind

"One man's trash is another man's treasure.", a fitting line borrowed from the poem Garage Sale by Tom Zart.

My dad was a tinkerer. He found pleasure in the pastime of fixing/creating things. He wasn't an engineer, had no formal training. If he had been born at a different time and under different circumstances he might have been an engineer but in 1926, at the age of 12, dad had to drop out of school to sell newspapers on a street corner and help support the family. (The Fair Labor Standards Act  prohibiting child labor wasn't passed until 1938 so actually children working at a young age wasn't all that uncommon at the time and not illegal.) His two older brothers had moved out of the family home about that time leaving dad as the oldest son still at home. The family, (which then consisted of dad, 8 of his siblings, and his parents) lived on the main floor of a two-story duplex on 35th Street in Detroit.

Dad held a number of temporary and part time jobs until he was able to get a permanent position with General Motors Ternstedt Fisher on October 7, 1936. I don't know what his job duties consisted of in those early years but I believe he "worked the line" at the Fisher Body plant in Detroit and later for a GM plant in Flint, Michigan. He may or may not have tinkered around at work but I know he did plenty of tinkering at home...

Besides the typical handyman projects that come along with home ownership, dad didn't hesitate to take on bigger projects. He built the garage and side porch in our backyard, finished the second story of our house, and did much of the rebuilding of our house after it burned in a fire when I was 2 years old. While these projects required construction know-how and a familiarity with tools, they weren't the kind of projects he liked best. What my dad favored was "collecting" broken and discarded things and cobbling pieces from them together to make one something that worked.

Dad was into the "reduce, reuse, recycle" thing long before it was cool. He would drive around one particular residential section of our city on Sunday evenings looking for items he could reuse or re-purpose, things that had been set out early for Monday trash pickup. I often went along with him on those drives and together we would look for discarded lawn mowers, televisions, radios, and tools. I never told any of my friends about my Sunday evening forays with my dad because I would have been mortified if they knew we went trash picking. But the truth is, I enjoyed the quality time spent with my dad and the conversations we would have along the way. We had it down to a science because timing was of the essence. To get the best pickings we had to go late enough that people would have put their trash out but before it got dark which made it difficult to see what was at the curb. Nothing made dad happier than coming home with a trunk full of "stuff" that he could spend hours at the workbench tinkering with.

Dad wasn't just a trash picker though. He also favored visits to the downtown Detroit Salvation Army store. That store got merchandise deliveries first thing Saturday morning and dad liked to be there as they unloaded the truck. No better way to get the best "stuff"! I accompanied him there too and often did a bit of shopping of my own (books, doll clothes, puzzles, etc.).

Once dad got his treasures home he'd set the lawnmowers in the side porch or behind the garage. If he had a particularly large inventory of them he'd stack some along side the garage. The televisions would go in the basement along with any tools or radios. At the time my dad died, he had over 20 lawn mowers in the garage, behind the garage, and along side it. He'd take parts off one to repair another one and then make me cut the lawn to test it out. That part I didn't like, lol! When he got one working, he'd sell it but that didn't happen very often. He refused to buy any new parts preferring to continue his trash picking trips until he found a mower that had the part he needed. It's amazing how many parts there were in those little Briggs and Stratton engines!

When it came to the television sets, he was always pulling out tubes and taking them for testing at Cunningham's Drug Store. Once again his aim was to cobble together a working set from discarded non-working ones. Sometimes he was successful, more often than not the TV got added to the collection on the shelves reserved for parts.

And then there were the cars... it seemed like my dad was always tinkering with cars. Of course that was back in the day when people could potentially repair their own cars... adjust the timing, clean and gap plugs, adjust the points or replace them, clean the carburetor, replace distributor caps or spark plug wires, grease the joints, do brake jobs, change the oil, rotate tires, etc. My brothers were right there with my dad doing all the car repairs and after dad got a winch in the garage they even overhauled an engine together. My brothers became tinkers too (no surprise there). Dad didn't like to buy new parts for the cars either but he couldn't find a way to collect them for spare parts. We just didn't have enough space in our little suburban back yard (thank you God!). So dad was a frequent visitor of the "junkyards" (scrapyards) in the area. 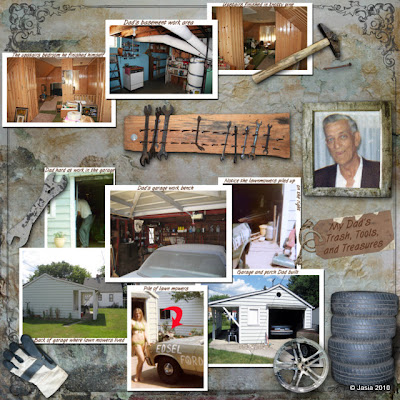 Like my mom, my dad was a product of growing up during the Great Depression. He lived through many difficult years when there wasn't always food on the table, at least not in sufficient quantities to feed his 6'2" frame. It made him resourceful in ways that seemed silly and embarrassing to me as a kid growing up in the 1950s and 60s. But his skills and resourcefulness served him well and gave him a purpose as he wiled away the hours at his workbenches and under the cars. He never had much in the way of a formal education but if he could find a manual for it or dismantle it himself, he could fix just about anything. He was a handyman. He was obviously mechanically inclined and probably would have made a darn good engineer. He retired from General Motors after 38 years of employment. His last job with GM was at the Warren Tech Center where he was a crib attendant (handing tools out to the engineers). A fitting job for a lifetime tinkerer.

It's funny how what used to be embarrassing is now cool. My dad wasn't reusing and recycling to save the planet. He was doing it to save money which was very understandable considering the life lessons he learned growing up during the Great Depression. Whatever the reason, I'm proud of his resourcefulness. I used to be embarrassed to bring friends home where they would see his piles of lawn mowers. Now I wish I could bring friends back to see those piles of lawnmowers so I could brag about how good dad was at "reclaiming" (the new popular word for trash picking ;-) and reusing! {grin}

Every family has a handyman, or woman, somewhere on their family tree. My dad was that guy.

Written for the 100th edition of the Carnival of Genealogy. The digi-scrap kit used to make my scrapbook page is called "Man at Work" and it's available at the Studio Girls web site.
Posted by Jasia at 2:55 PM