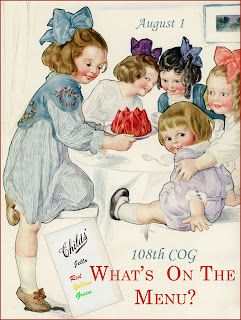 Once upon a time, when I was just a wee kiddie, my mother used to make Czarnina. Czarnina is also known as duck blood soup because it is made with duck blood, and the rest of the duck too. ;-)

I can imagine your reaction right now. YUCK! probably sums it up, right? I guess that would be my reaction too if I hadn't grown up eating it. But I did. And I still love it.

Czarnina is a Polish soup. The name czarnina comes from the Polish word, "czarny" which means black. The soup isn't actually black but it is dark brown. There are many variations of czarnina but of course I like my mom's recipe best. Unfortunately, she never wrote it down so I don't have it. Even if I did, it's not likely I'd make czarnina because I have no source for duck blood. There are recipes for czarnina that don't require actual blood but I've tasted several of them and they just aren't the same and I don't care for them.

To the best of my recollection, the ingredients in my mom's version of czarnina included: duck meat, prunes (I know, more YUCK! right?), golden raisins (yes, in soup!), sliced carrots, large egg noodles, vinegar, and of course duck blood. It was always served hot with fresh bakery bread and butter.

The soup has a sour/sweet taste to it and because of all the fiber in it, it's quite filling. It's still commonly served in Polish restaurants although I've yet to taste any I really like at a restaurant. I prefer beet soup when I dine out at a Polish restaurant. Aw, come on now, you're not gonna wrinkle your nose at that too, are you? OK, if you're gonna be that way I'm not even going to tell you about dill pickle soup...

So, back to czarnina. My mom hated making it. Can you blame her? And she never ate it herself. I remember asking her why she never ate it and she said, "If you made it, you wouldn't want to eat it either." That could maybe, possibly be true but I don't know... I really like czarnina.

My dad was a huge fan of czarnina and that's why my mom made it. Still, she tried to avoid it as much as possible. But inevitably Dad would get a taste for czarnina and he'd make a trip to the Eastern Market, a mostly outdoor farmer's market in downtown Detroit that has been selling fresh produce and plants (and they used to sell live chickens, ducks, and rabbits for cooking but I doubt if they still do) since 1891. My great grandparents very likely shopped there since it's on Russell Street just a few blocks south from Sweetest Heart of Mary Catholic Church, their Polish parish.

Dad took me to the Eastern Market with him on Saturday mornings. I enjoyed walking around and looking at what the vendors had to offer. The market was always full of colorful fruits and vegetables and the sounds of vendors hawking their wares. And you could hear the ducks and chickens for sale squawking away in their wire crates. It was always a busy place.

In my earliest memories, my dad used to pick out a live duck and ask the vendor to kill it and save the blood. Then we'd go do our other shopping and return to pick up the duck (wrapped in brown paper but with the feathers still on) and the blood (in a cardboard soup container) on our way out. When we got home, Dad would give all the market goodies to Mom and she had to take it from there.

In later years, we had to bring the live duck home (probably due to health department regulations) and my dad would kill it in the basement and hang it upside down from the clothes line and drain the blood into a serving bowl. Then he'd hand it over to Mom and she took it from there.

Mom would start a big pot of water boiling right away. Once the water was hot she would immerse the duck in it for some period of time. I don't remember how long. After that she would take the duck down into the basement and pluck the feathers from it by hand in the stationary tub. I remember it being a long and tedious job and she never had a smile on her face as she was doing it.

As a kid, I lost interest in the czarnina making process after that point. So I don't actually remember all the steps to it. If I'm not mistaken though, the blood was added last, just a short while before serving.

Czarnina was a New Year's Day tradition at our house. The only New Year's Day tradition I remember, actually. I clearly remember eating big bowls of it on metal tray tables in the living room in front of the television, along with my brothers. We were probably watching football Bowl games on TV. We'd make jokes about the soup often calling it, "breakfast of champions!" Dad usually ate his in the kitchen. He wasn't much for football games.

I can't remember how old I was the last time I had my mom's czarnina. I'm guessing I was probably in the 13-15 yr old range, possibly as late as my high school years. My dad died when I was 17 and I'm absolutely certain that my mom never made czarnina after that. My brothers and I asked her to make it many times over the years but she was quick to squelch that idea.

I have no photos of czarnina but the one here looks similar to my mom's soup.

Every now and then when I visit a new Polish restaurant I'll try the czarnina hoping it will taste like my mom's but so far I haven't had any luck. How I miss that "breakfast of champions!"
Posted by Jasia at 12:39 PM