My family has practiced the Catholic faith as far back as they appear in written records. And they practiced their faith in Poland up until the last 100 years or so when some family members immigrated to the U.S. and to nearby European countries. Those who came to the U.S. as well as those who stayed in Poland continued to practice their Catholic faith until their deaths. And they passed the Catholic teachings on to their children. So I come from a long established line of Polish Catholics.

My maternal grandmother came from the town of Wojnicz, Poland. It’s located in the southern part of Poland, Tarnow District, Malopolska Province. Back in the days when Poland was partitioned, it would have been in the Galcian (Austrian) section. The town of Wojnicz currently has a population of 3,500 people (2008). Back when my grandmother lived there the population was 1,683 (1880-1902), so it has roughly doubled in size since her birth in 1894.

I have come across a number of different dates for the founding of the city of Wojnicz, all in the 1200s. The first written reference to the city was in 1278 but it is thought that a Catholic parish existed there from the late 11th century. In 1465, Bishop Jan Lutek of Brzezie was the local provost. After a time, the church at Wojnicz was elevated to the rank of Collegiate (c. 1621) but the Collegiate status was removed by the Austrian government in 1786 (while Poland was partitioned).

The original church building was referenced in texts in 1325-1327. It was remodeled and added to in the mid 15th century. That church became St Lawrence the Martyr and was destroyed by fire on March 23, 1752. The entire original wooden structure was destroyed including the nave ceiling and roof. All that survived was the contents of the vault. The church was rebuilt in 1753.

In 1914, the church was again destroyed, this time as a result of war (WWI). Rebuilding took until 1920. My grandmother left Wojnicz for America in late 1913. It must have been heart breaking for her to learn the fate of her beloved church so soon after she left. It was the place where generations of her family before her worshiped and prayed, were baptized and married, and where they were finally laid to rest.

In 1930 the church was expanded to accommodate more pews. In the years 1958-1960 the front tower was added and it was architecturally refined 1997-2001. There were a number of other building improvements made over time as well. Originally the church had one nave, now it has three. There are chapels in both the north and south naves. I can’t help but wonder if my grandmother would even recognize it now. But expansion was needed as the population of the area grew. There were also additional churches built in surrounding towns to accommodate the need.

St Lawrence the Martyr Church in Wojnicz was more than just a church. In the 15th and 16th centuries it also served as a school. The first known teacher, Stanislaw, was referenced back in 1439. This church in Wojnicz served as a learning center for clergy from the Krakow and surrounding areas. It had a fine collection of books, most theological.

The parish of St Lawrence also has it’s own cemetery with a chapel. The cemetery is localed on Tarnowska Street, a ways east of the Rynek (city square).

Below you will find an aerial map of Wojnicz (thank you, Google!). The green arrow points to St Lawrence the Martyr Church. The yellow rectangle is the city square. The red circle indicates Zamoscie Street, the area where my Molecki and Kielbis families lived. The blue arrow pointing west on Krakowska Street indicates the area where my Bober family line lived. And the purple circle indicates the location of the parish cemetery. I have many more family lines from Wojnicz and surrounding towns but I only know the house numbers not the street names so I can’t pinpoint them on this map. 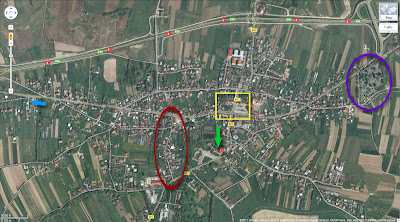 I put together a couple of scrapbook pages with photos of St Lawrence the Martyr Church and cemetery in Wojnicz. I am fortunate to have a dear cousin who took the photos for me (+ one from Wikipedia). 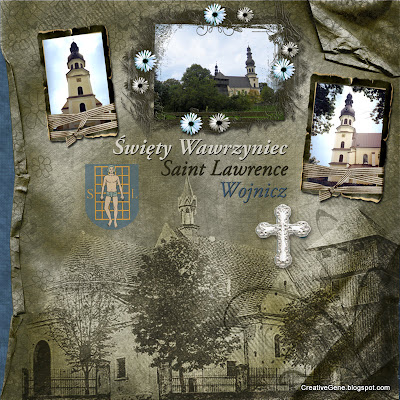 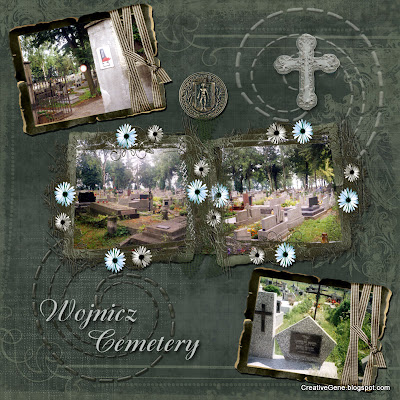 I am ever so grateful to Google Translate. It continues to be my most used tool for genealogy research. It goes without saying that I am also hugely grateful to my Mizera cousins in Poland who traveled to my family's ancestral villages to photograph that which I cannot do for myself.

St Lawrence the Martyr parish has a wonderful website with virtual tours of the interior and exterior of the church as well as the cemetery. You don't need to read Polish to navigate and enjoy them. See the beauty!

[Submitted to the September 4, 2011 edition of the Carnival of Genealogy.]
Posted by Jasia at 5:40 PM