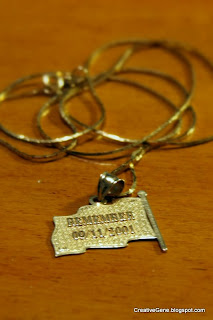 September 11, 2001. I remember where I was that day, just like most Americans. It's a day that marks a major event in our lives. Not only do we remember the events of that day but it also marks a point on a time line. As we remember that day we also remember the day before and the day after. The day before represents life as we knew it without fear of terrorism on our shores. The day after represents life as we now know it, with a loss of innocence, and an increased concern for our own and our fellow man's well being.

One of the great things about digital cameras is that a certain amount of meta data is stored with each digital photograph. One of the most valuable bits of meta data is the date a photo was taken (assuming you set the date on your camera; -). That date allows you to quickly find photos taken on or about a given date using photo organizing software. So this morning when I wanted to reflect back on the events that happened in my life just prior to 9/11, I just started up Picasa (my photo organizer of choice) and did a search for 2001.

In just a few minutes I was able to scroll through months of family events leading up to September 11, 2001. It was the year my daughter turned 16 so there were pictures of her first boy-girl party, the car we gave her to drive, and some great pictures of her with purple hair (it was all the rage at the time). It was also the summer of our biggest family vacation. There are hundreds of pictures taken on our month-long drive across the country and back again… Mining for diamonds in Arkansas, eating barbecue at Billy Bob's in Ft Worth, Texas, touring the Alamo in San Antonio, hanging out at the resort in Phoenix, touring the stars' homes in Hollywood, walking the beach in Monterey, the 4th of July fireworks over Fisherman's Wharf in San Francisco, touring the venues under construction for the 2002 winter Olympics in Park City, Utah, and dining at a sidewalk cafe just outside Denver surrounded by the beautiful Rocky Mountains. It was the best vacation ever. On September 10, we celebrated my son's 11th birthday. There were two babies born in the family that summer so the photos from my son's birthday party are also filled with the faces of his new cousins. Life was good. Very, very good.

On the morning of September 11 the weather was absolutely beautiful here in Michigan. I remember blue skies and mild temperatures. I had an 8:30 AM appointment to get my teeth cleaned at the dentist's office and I was in the dentist's chair when the first plane struck the world trade center. I remember walking out of the examining room and seeing the waiting room filled with people, everyone looking up at the television. The receptionists were there, the dentist was there, the hygienists were there, and some patients were there. I remember asking," what's going on?", and someone answered, "a plane just hit the world trade center in New York".

I remember feeling puzzled. I just assumed that a small private plane had veered off course and crashed into a tall building. I couldn't figure out why everyone was standing around watching the television. I didn't feel an immediate sense of alarm or fear… just puzzled over people's reaction. One of the receptionists came over and checked me out after setting an appointment for six months later. I left the building and got into my truck and immediately turned on our local "all news all the time" station, WWJ am Detroit. Within less than a minute I knew the taste of fear.

The drive home took about 20 minutes and by the time I got to my house I was very frightened. As early news stories often are sketchy, I still didn't understand just what was going on. By then the second plane had hit the world trade center and the first report of the plane hitting the pentagon had come in. I knew that these events were not accidents. But it wasn't until I got home and turned on CNN that I realized what was really happening. My country, the place I always felt safe, was under attack.

I was glued to the television all day. I remember feeling very frightened and at times looking down at my hands and seeing them tremble. I remember praying for survivors. At some point in the late morning I spoke with my husband by phone. He said some folks were watching the events on the TV screen at work but for the most part it was business as usual. He didn't seem overly concerned. I thought about my children who were at school that day and wondered what if anything the teachers were saying to them. I wondered if they were frightened and hoped that they were not. I wondered what I should say to them when they got home from school. In the early afternoon I switched on the radio again for local news. I remember a neighbor phoning me and telling me that she had spoken to the high school principal who told her they would not be dismissing school early. I made a decision not to tell my son what was going on unless he asked about it. No need to frighten him unnecessarily. I also decided I would discuss it with my daughter who at 16 was old enough to understand the significance of the day's events.

My daughter called me on the phone when school got out. She said she and her girlfriend Lisa we're going to the mall to do some shopping and just hang out for a while. In a very no nonsense tone of voice, I told her she would do no such thing and that she and her friend Lisa had to come home right away. She wasn't used to me talking to her like that and asked what was going on. I asked her if she'd heard about what happened in New York City. She said she heard something about a plane hitting a building and asked if that's what I meant. I told her that it was much more serious than that and that our country was under attack and she needed to come home right away. I don't remember her exact words but I remember that she thought I was exaggerating or kidding. I assured her that I was not and that I expected her and Lisa to come straight home. Lisa's parents both worked fulltime and I didn't want her to go home to an empty house.

When the girls got home I told Lisa to call her mother right away and let her know that she was OK. Both girls were puzzled and confused and joined me to watch the CNN coverage. I gave them a brief synopsis of what had been going on all day. For my daughter it was not personal. She had never been to New York City or the World Trade Center. But for Lisa it was quite shocking as she had just recently been in the World Trade Center on a trip to New York City. Both girls watched in horror, asking few questions. I told them not to say anything to Colin when he got home from school. The three of us watched the CNN coverage of the September 11 events together until Lisa's parents got home from work and she went home.

When my son got home from school I acted as if everything was normal. He acted like everything was normal too so I knew that he wasn't frightened. I asked him if anyone at school had mentioned anything about a plane crash that was on the news today. He said no, but he heard some of the "big kids" on the bus talking about a plane crash. I told him it was no big deal, it didn't happen anywhere near us, and it didn't happen to anyone we knew. He was totally fine with that and wanted to go across the street and play with his friend. I told them that was OK because I knew they would be playing outside in the yard where I could see him, and away from television.

The rest of the day is a little fuzzy for me. At some point my husband came home. At some point I made dinner and we ate it. I remember my husband asking me why I kept watching the horror stories on TV and warning me that I would have nightmares. I remember watching the news coverage all evening and into the wee hours of the morning. And I remember that the next few days were much the same for me. It was on either the second or third day of coverage that the tears came. It was all I thought about or talked about for a long time.

I remember that President Bush grounded all the aircraft over U.S. airspace. I remember hearing discussions about whether high school, collegiate, and NFL football games should be played the following weekend (they played). I remember that when my daughter and the rest of the high school marching band took the field at halftime and played the national anthem there wasn't a dry eye in the stadium. I remember going to watch my son play football that Saturday and buying a U.S. flag pin from the Brownies and Girl Scouts who were selling them at the game. I remember wondering if life would ever be the same again.

Life did go on, I have the pictures to prove it. My mother's only sister died a few days before Christmas and was buried after a funeral mass on Christmas Eve. There was much sadness for all of us that holiday season. Not only did we grieve for my aunt but also for all those lost on September 11, 2001.
[Updated September 11, 2011]
As we mark the 10th anniversary of the tragedy that struck our nation on September 11, 2001, I find myself remembering the feelings I had that day. I was terrified, horrified, confused, worried, angry, and very, very sad. It all seemed so surreal back then, like I was watching an action film on TV. But where were Bruce Willis or Pierce Brosnan to save the day? It's so much more awful when it's real and not a story Hollywood made up. Even 10 years later, it's still horrific to remember.

This week our local news station interviewed a couple of the guys who were working in the control tower at Detroit's Metro Airport on 9/11. It was chilling to hear them share their memories of the events of that day and the unprecedented grounding of the entire U.S. airspace.  I still marvel that with all the thousands of aircraft in the sky that day, they were brought down safely and quickly with no rehearsal and no accidents. The air traffic controllers around the country did an amazing job.

My heart goes out to those who lost their lives that day and their families and friends who have had to live on without their loved ones... the people working at Cantor Fitzgerald and other businesses in the World Trade Center towers, the first responders who bravely tried to save lives, the folks at the Pentagon, and those on Flight 93 who crashed in a field in Pennsylvania. The photo above is of a gold charm that my son gave me for Christmas 2001. I wear it each and every 9/11 as I remember and pray for those who lost their lives and those who lost their loved ones. May God bless them all.
Posted by Jasia at 6:30 AM