A November Wedding in Poland

The wedding took place in a little Polish village church at 11 o’clock in the morning on November 23, 1864. The church was built in 1640, replacing the previous structure which was built in the early 1400s. This building stood the test of time and bore witness to many a baptism, marriage, and funeral in addition to thousands of daily and Sunday Masses of the Catholic faith by the time my great great grandparents were married there. It’s a true testament to the long standing Catholic faith of my Polish ancestors.

There is much more I can’t tell you about my great great grandparent’s wedding day than what I can tell you. I know that November 23rd was on a Wednesday back in 1864 but I don’t know what the weather was like that day. I don’t know what the bride wore or the groom either for that matter. I don’t know if the couple were in love or even had a fondness for each other. In all likelihood, it was an arranged marriage for that was the common way things were done in Poland back in the day. Did their family and friends attend the wedding? I don’t know. Was there a big celebration after the church ceremony? I’d like to think that but truly I don’t know that either. I have no diary, notes, or photos to tell me about this wedding day. But I do have what I know of Polish history and what I’ve found in the way of vital records to help me set the scene of the wedding of Bartłomiej Adamski and Konstancja Cieślak.

On his wedding day in 1864, the groom, Bartłomiej (pronounced BAR-TWOW-ME-AY, the Polish version of Bartholomew) was 40 years old and a farmer in a nearby village. This was his second marriage. He and his first wife had 7 children together, 4 of whom didn’t live to see their 8th birthdays. When his first wife died, 10 months before his marriage to Konstancja, Bartłomiej was left with 3 children to raise. Those children were ages 7, 5, and 3. Both of his parents were deceased at the time of his marriage to Konstancja.

On her wedding day in 1864, the bride, Konstancja (pronounced CONE-STAN-SEE-YA, the Polish version of Constance) was 26 years old and was a “lodger” at a nearby farm. That means she was one of a number of people who worked the land for a landowner in exchange for their room and board and likely nothing more than that. Think along the lines of a slave and you come close to her standing at the time. This was her second marriage as well. Her first husband died 11.5 months earlier. I don’t know how long she was married to her first husband or if they had any children together. Her mother was still alive and living in a nearby village but her father was deceased. A marriage to Bartłomiej, an established farmer, would have been a good opportunity for her at the time. Especially since she was pregnant on the day of her wedding to Bartłomiej and would give birth to my great grandmother, Jozefa, just 14 weeks later. Was Bartłomiej the father of her child? It’s a sure bet her first husband wasn’t the father. It’s certainly possible that Bartłomiej was the father but there’s no way to know for sure.

Autumn was the most common time for weddings in 19th century Poland because it was the season of harvest. And right after a harvest was the time when most larders were full of food and outdoor work was winding down for the year. What better time for frivolity and celebration! In my family history database, I have twice as many weddings in the month of November than the next most common month for weddings, October. Catholic weddings were not generally performed during Advent (basically the month of December) or Lent (basically the month of March) which only leaves 10 months to choose a wedding date from. The October-November time frame was very popular for weddings, so much so that I imagine most villages had one or more weddings each week. And given that everyone knew everyone in the typical rural villages in Poland, and given that wedding celebrations often spanned multiple days, they probably partied for 2 solid months each year! ;-)

I have no photos of Bartłomiej and Konstancja to share with you but I do have a picture of the church they were married in. It stood in this place for many years before them and it still stands many years after them. 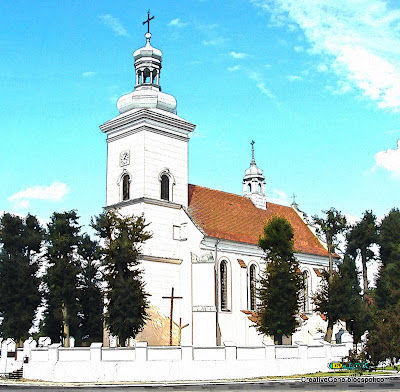 I honor the 147th wedding anniversary of my great great grandparents with this post. I hope Bartłomeij and Konstancja are happy together in heaven.
Posted by Jasia at 2:08 PM