Some people touch your life in big ways, some in little. Most people don’t even realize the impact they have on your life, especially those who only touch it briefly and then are gone. Such is the case with Natalia who sent me an email a few weeks ago. I don’t know her, never met her, and probably never will. I may be related to her. I think the odds are pretty good but at this point I can’t prove it. She contacted me because of information she found on my blog regarding the village of Podborze, Poland. Her grandparents are from that village. We share surnames in common.

The most interesting part of her email was the information she shared with me about a document she found online. The document told of a tragedy that happened in Podborze in WWII that resulted in 23 family’s homes being burned to the ground by the Nazis. She listed the names of those families and most of those surnames are on my family tree. I was at once grateful that she had shared that info with me, curious to see the actual document she was referencing, and haunted at the thought of the tragedy.

Can you guess what happened next? I wrote back to her asking for more information, specifically about the document she mentioned as well as about our possible connections. She never replied.

That left me with no choice but to go out and do an internet search and find that document myself. Curiosity was eating away at me. My mind kept recalling her email and all the names she’d listed. Below is that list of names. I’ve highlighted those I’m certain I’m related to.


I suspect another one or two of the people on this list are my family members as well but I need to do more research to verify that. The long and the short of it is, the story of what went on in Podborze becomes very personal with this many of my family members affected!

So, on with the search. My gut told me I wouldn’t find out anything about the village of Podborze doing a typical Google search but I tried it just the same and came up with nothing. Next I tried a search using Google.pl (Polish Google). Bingo! It wasn’t the first item to come up in the search but I found it eventually. I kept trying “Podborze” plus one of the surnames from the list. I don’t remember how many different surnames I tried before I found it but it took a while. And when I found the document I sent a mental thank you across the miles to the folks at Google headquarters for having created the Google Translate program. I would never have found it or read it if they hadn’t.

It turns out that the document was an 80+ page academic paper written for a regional conference on the topic of the Holocaust and Jewish/Polish relations. It was edited by Dr. Maria Przybysewska and presented in the nearby town of Radomsył Wielka in September 2007. The document tells of Polish/Jewish relations over the centuries and ends with stories of heroism of villagers from several Polish towns and villages during WWII, one of which was Podborze. On September 22 and 23, 2007, there were celebrations held to honor the heroes of Podborze and an obelisk that was erected in the town was unveiled.

I’m not going to try to condense an 80+ page translated academic document here. If you are interested in reading it in its entirety you can download it here. However, I will share with you a condensed version of the section that pertains specifically to Podborze and my family members.

In 1943, the Nazis were all about annihilating the Jews in Poland and had been doing such for years. There was a large population of Jewish families living in nearby Radomsył Wielka. They were killed, virtually all of them. However, one Jewish family escaped to Podborze when the Nazis had taken away their buildings and land 2 years earlier. From 1941-1943 the members of that family survived by living in the neighboring forests when weather permitted and were given sanctuary by a number of villagers much of the time as well. This was at a time when the Nazis had decreed that any Polish citizen who harbored a Jew would be killed for doing so. So the villagers of Podborze were putting their own lives at risk to help this Jewish family.

On April 23, 1943, the Nazis returned to Podborze looking for the Jewish family. Their intelligence information told them the family was living with Jan and Karolina Dudek. They went to the Dudek home but only their children were there. Jan and Karolina were gone for the day. One of the Jewish family members had been there but he escaped to the woods. The Gestapo went to a neighbor, Antoni Kilian, and tortured him in an effort to learn where the Jewish family was. But he did not tell them. The Nazis would not leave the situation at that. They set fire to the Dudek farm and set self-igniting devices in several other homes knowing that one after another they would go up in flames. And not only the homes but the out-buildings too. The home owners tried to salvage what they could from their burning homes but most lost everything. It was a tremendous fire and the Nazis also burned the building housing the fire fighting equipment so the villagers couldn’t even fight it. When the smoke cleared, 23 farms were destroyed along with the fire house. The homeowners had a very difficult time surviving afterwards. Most lived with extended family for a time and built straw huts to live in during temperate months. Years later evidence of the fire was still visible. The true miracle is that none of the villagers were killed in the incident.

And what of the Jewish family? Some of them survived, some did not.

So, what a find, eh? I was gobsmacked. Twenty-three families in the small, poor farming village of Podborze lost their homes and all of their worldly possessions because they were blamed by the Gestapo for harboring one Jewish family. Some of them undoubtedly did give shelter to the Jewish family, but did all of them? They all paid a high price nonetheless. Putting it in perspective, they didn’t pay with their lives as did so very, very many Jewish families but it is an example of how the Polish people suffered at the hands of the Nazis for trying to protect their good neighbors. I’m so glad that the memory of these residents of Podborze was honored. Their quiet acts of heroism are worthy of that at least.

This was the latest “find” related to my family history. I don’t come across this sort of information often so it is really valued when I do. How I wish I could search the last hundred years of newspapers near the villages in Poland where my ancestors lived. But I don’t believe such newspapers exist. Certainly there was no such thing as a “free press” during Poland’s long occupation by the Soviets. A few of Poland’s larger cities had newspapers but that wouldn’t help me. My family came from obscure farming villages in the middle of nowhere. Their names are not likely to be mentioned in any big city newspapers. Just another of the many challenges of researching family history in Poland.

The photo below is of Michał Laska (#18 on the list), my Granduncle, the only one of my relatives listed that I have a photograph of. This photo of Michał was taken in the 1980s. He was born September 27, 1906 in Podborze and died September 16, 1994 in nearby Zgórsko. Sadly, he didn't live long enough to know he was one of those honored for his sacrifice in Podborze. It was very fitting that he was remembered at the ceremony in Radomsył Wielka in September 2007 (September being the month of his birth and death) and is again being remembered in the September edition of the Carnival of Genealogy. Rest in peace, dear Michał. 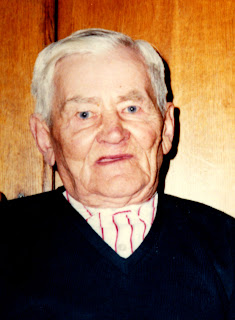