Father's Day for an Adrenalin Junkie

I do believe there is a gene responsible for one's tolerance of excitement. For people like me, that gene renders me adrenalin-sensitive. Which is to say that a little too much adrenalin creates a great deal of fear... otherwise known as panic. For average people, the gene creates a condition of adrenalin-tolerance... a somewhat balanced state. And for people like my husband, the gene creates adrenalin-addiction. These people can't get enough of the stuff!

When I asked my husband how he wanted to spend Father's Day I asked it knowing he wouldn't be content with a greeting card, a necktie and a steak on the grill. Instead he chose to ride down a hill inside a 12 foot wide inflated ball (otherwise known as a "Sphere"), pulling 3-4 Gs and making his head spin. This is how an adrenalin junkie likes to spend Father's Day. Oh, and he did take our son on this adventure with him... my son inherited the adrenalin-addiction too.

I on the other hand, was not in the least bit tempted to try this new sport. I was very content to stand on the sidelines and take pictures. It was a nice challenge for me to try to take some still shots and some video all in the space of a few minutes. Here's how things turned out: 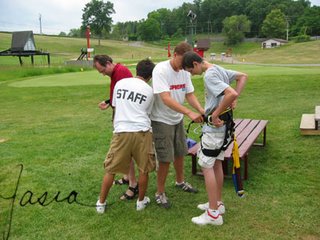 Here's the guys getting their harnesses on... 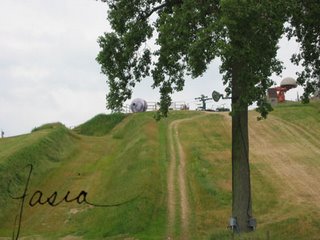 Here's the sphere at the top of the hill. You get your choice of walking up the hill or being driven in a golf cart. Once at the top, you are loaded into the ball and your harness is attached.
Then... the ride begins!

After the ride ends, the staff come running to see if you've survived ;-) 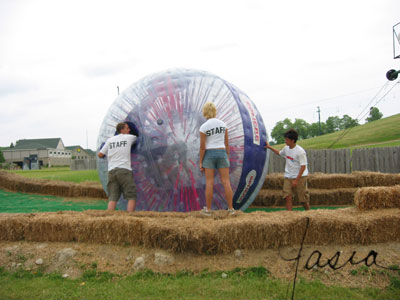 After they've given your head and your stomach a chance to settle, they let you out. 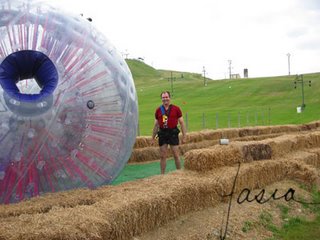 And people like my husband wear a shit-eating-grin for the rest of the day.

What do you say, ready to ride? If you think Sphere Mania is for you, check out their web site at: http://www.spheremania.us/