The following is excerpted from Poles in Michigan, Vol. 1

Posen, Part 1 of 2
History of an Old Polish Settlement in Northern Michigan
By Dr. Stephen Wloszczewski

In Northern Michigan, 260 miles north of Detroit, amidst primitive nature, on rocky, barren soil, among the timeless forests through which even today roam bears, wolves and lynx, lies - Posen.

An agent of the Federal government was stationed in Detroit, selling homesteads for three to five dollars per huge section of land. There was only one condition: five years of residence and cultivation. Every German laborer in the sawmills, breweries, and other workshops in Detroit was informed of this. The same must have been true in the other larger urban settlements of Michigan - Grand Rapids, Bay City, Port Huron.

The Poles, as it is known, came at that time exclusively from the Prussian part of Poland and some spoke German very well. As workers of Germans they got information from them.

This is exactly how the first Polish village settlement - Parisville in Michigan, lying 100 miles north of Detroit - had its beginning. Parisville, as the Poles named it, was established 20 years before Posen. Twenty years after Parisville, perhaps even 15, when in all probability the better lands in Southern Michigan had already been sold, the parceling of lands into homesteads began around Alpena and Rogers City.

This was the motive for the coming of the prospective settler from Detroit by boat to the two ports on Lake Huron - Port Huron and Alpena, and perhaps Tawas. At Port Huron it was necessary to transfer from one boat to another and more than once the voyage of the Polish homesteader ended here.

On occasions money was lacking even for the voyage to Port Huron. Then the impoverished traveler set out on foot.

One of the oldest farmers in Posen, Francis Szmigielski, 91 years old, told the writer that his father began the journey from Detroit to Alpena on foot. He carried a rifle, (with which he killed four wolves along the way), a small barrel of flour (sacks were not in use then), and a small, woodburning stove.

There was also another motive for the coming to this locality of the first Polish settlers. Perhaps even a more universal one. The youth who was oppressed by parental discipline and who desired to emancipate as soon as possible, - took off into the forests of Michigan to labor in the lumber camps. One of the famous lumber barons of his day was Albert Molitor, former Prussian officer. He erected huge living barracks in the vicinity of present day Posen, and beside them canteens and stores where the workers were forced to buy everything and pay heavily for it. This was unmerciful profiteering and as a result of this system every one of Molitor's workers was always up to his ears in debt with flight as the only relief. Wojda, for example, once escaped through a window, at night, leaving his belongings behind him. Others did the same. This inhuman profiteering was ended only by death. Molitor was killed by another German. 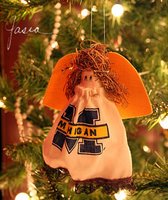 (Click on image for larger view)
It's no secret that I'm a fan of the University of Michigan, it's my alma mater. I'm also a big fan of angels. So it's only natural that I have a Michigan Angel on my Christmas tree. I picked up this ornament at a little gift shop in Dearborn, Michigan.