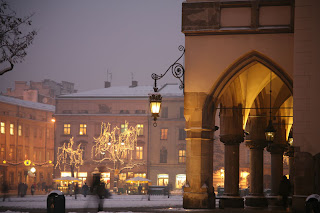 From the (Polish American Forum)

As few as two thousand new citizens need to be registered in
Krakow's Municipality office and this ancient capital of Poland will
become the second biggest Polish city. The demographic study that
has just been published shows a considerable increase in the
population of Krakow – especially in the last five years.

Apparently, only three more months of steady population increase and
Krakow will boast over 760,000 citizens. In this way it will
overtake the current runner-up to the title of the largest city in
Poland, i.e., the industrial city of £ódŸ located in the centre of
Poland. It's worth mentioning that ten years ago the distance
between Krakow and £ódŸ was 150,000 citizens.

The major cause of this population boom is Krakow's position as one
of the most popular European cities. Every year several thousands of
tourists – out of 8 million visiting – fall in love with the city,
buy some property and effectively become Krakow's citizens.

It explains why so many new citizens of Krakow come from England,
Scotland and Ireland. Moreover, Krakow's becoming more and more
attractive place for the young who do not abandon the city after
graduation but stay here soaking up in the city's cosmopolitan
atmosphere.

Krakow also boasts the highest childbirth rate in southern Poland –
much boosted by the fact that the local government gives some extra
money to all newborn Krakow babies.

This year the city celebrates the 750th anniversary of its location
and receiving the city charter. Becoming the second biggest Polish
city would undoubtedly be the best gift Krakow could receive for the
occasion. However, so as to overcome Warsaw, Poland's largest city,
Krakow still needs to attract at least a million new citizens.

To see some of the beauty of this city visit Krakow.pl (it's in English!)
Posted by Jasia at 8:00 PM