As far back as I can remember, I've had a strong feeling of patriotism. Caring about one's country was modeled for me at home. My mom was very patriotic. She was born during WWI and dated and married during WWII. She felt a strong allegiance to her country and took pride in "doing her civic duty", voting. I suppose my dad must have voted too, but I don't remember him talking about it. For my mom, voting for President was a high honor and one she took very seriously.

I can remember tagging along with my mom when she went into the voting booth at my elementary school for the 1960 Presidential election. That would have been John F. Kennedy vs Richard Nixon. The voting booths were the gear & lever type that you walked up to and pulled a handle to close a curtain around you. Then you pulled the levers over the names of the candidates you wanted to vote for. When you were all finished you pulled the handle again, the curtain opened, and your vote was registered. As I recall, the booths were in the music room of the school for non-Presidential elections but in the gymnasium, which could hold bigger crowds, for Presidential elections. 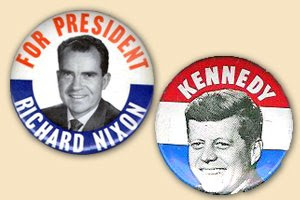 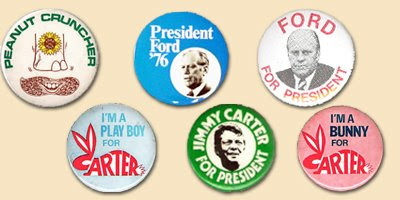 The election that stands out in my mind as the most memorable was one I couldn't vote in because I wasn't 18 yet. It was the Presidential election of 1972, Richard Nixon vs George McGovern. I was a junior in high school and the war raging in Vietnam was the central issue of the campaign. Those were the days of peace signs and mini skirts. The military draft was still in effect so my male classmates were all worried about having to go off to war after graduation. Naturally, we were all vocal in our opposition to the war, but those of us with family members fighting in it had conflicted feelings. We wanted to support our troops but also wanted the war to end. I remember campaign banners strewn along hallways and across stair wells in my high school, one in particular stands out in my mind, "Why change Dicks in the middle of a screw? Vote for Nixon, '72!". Can you imagine that being tolerated by the administration? It was! 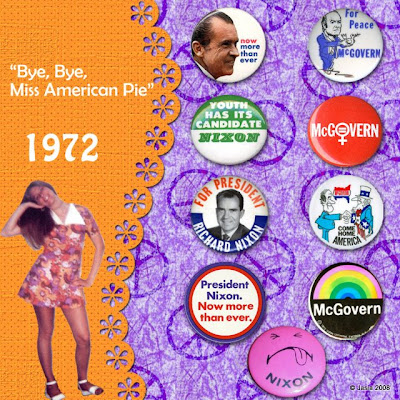 I've voted in seven Presidential elections since my first in 1976. I've heard lots of trash talking and promise making over the years. To my way of thinking, the candidates involved in the campaigns were never really as bad as they were made out to be during the campaigns and very few of the campaign promises ever materialized as presented. It's all a lot of rhetoric meant to incite fear and inflame passion, two things likely to get voters to the polls on Election Day. The 2008 election is just more of the same as far as I'm concerned. Am I cynical? Yes, I have to admit I am. Having said that, I'll be at the polls to cast my ballot on November 4th. I do care about my country and I take my civic duty seriously.

Take a look at the elections my ancestors likely participated in in My Family's Voting History, Part 1.
Posted by Jasia at 10:15 PM