The Magic in Grandma's Parlor

My 5 year old brain could not process what my eyes were seeing and my ears were hearing. "It's magic", my brother told me, and I had to believe it. I stared and stared, fascinated as only a curious child can be. It didn't make sense but then magic never does, does it? I remember thinking my grandma was the luckiest person ever to have something so magical in her home. Boy, wouldn't I like to have one of those for my very own. Imagine, a piano that plays all by itself!

Even at the age of 5 I knew you had to use your fingers to play a piano. But right before my eyes was evidence to the contrary. How could that piano be playing all by itself? The keys danced up and down, up and down, several at a time even! And as the keys danced you could hear the most beautiful melody. I'm not sure if I was more fascinated with the keys moving up and down by themselves or the song that was playing. I'd sat at that piano many times in my short life and plunked away at the keys, making sounds that my mom and grandma used to cringe at. It was just a big version of the piano I had at home. Or so I thought. I had no idea the piano was magical and could play by itself!

I rattled off questions as fast as they popped into my head. "How does it do that?", "How does it know which keys to press down?", "How did it decide to play that song?", "Does it know any other songs?", "Why didn't it play like that when I sat at it?", "Can we get one for our house?", "Please, please, please, mommy!"

As my mom sat at the piano with the parlor blanket over her lap she explained to me that this was no ordinary piano, it was a player piano. When the song ended she explained that there were foot pedals in the bottom of the piano and then she pulled the blanket back to show them to me.

"You pump the pedals and it makes the piano roll go around", she explained.

"Where did the piano roll come from?"

"Grandma has a whole bunch of them in the closet."

"Let's play this one again and then we'll play a different one", she replied.

"Where did those pedals come from? I've never seen them before."

"They're hidden behind this door. You have to pull this lever to open the door and pull them out." She pointed to a lever under the keyboard that I'd never noticed before.

"Can I pump the pedals, mommy?! Please!"

"You can try, but I don't think your legs are long enough to reach the pedals yet."

I did try and my legs weren't long enough to reach the pedals when seated. If I leaned back against the piano bench with my elbows braced on top I could just reach the pedals but I didn't have enough weight or muscle to pump them. They required quite a bit of effort as I would learn in later years once my feet did reach the pedals.

That magical player piano was a gift to my grandmother Sophie Mizera Lisowski, from my grandfather Vincent Lisowski, on her 31st birthday (June 1925). My mom, who would have been almost 7 at the time, remembered the day the piano was delivered. It was quite a novelty and the talk of their immigrant working class neighborhood. At that point in time, my grandparents had been married for 9 years, and had 3 children. It had been 12 years since my grandmother immigrated to the USA from Poland, 13 years for my grandfather.

The piano was a Bush and Lane Cecilian. My grandfather paid $1075.00 for it. The receipt indicates that my grandfather put $300 down on it and the other side of the receipt shows he paid the remaining $775.00 three months later in September of 1925. 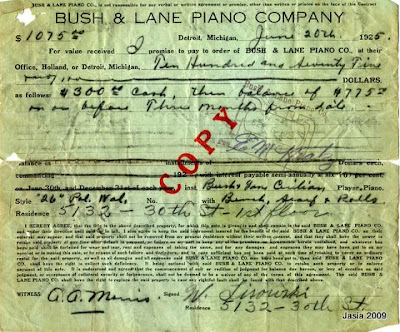 This famous name, which has been known in the piano players' industry for a score of years, is owned by the Bush & Lane Piano Co. and is used to designate the players' pianos of the Bush & Lane and Victor lines. The Cecilian players' action, manufactured exclusively by the Bush & Lane Piano Co., contains many valuable improvements and special features to humanize the playing that is not found in other players. It's ease of operation. It's freedom from trouble, its responsiveness to the controls that enable the operator to produce artistic musical effects place the Cecilian in a class by itself and. Coupled with the excellent pianos in which it is installed, the Bush & Lane and Victor, it produces musical instruments of the most advanced type, capable of operation easily with the most charming musical effects even by those who have no technical knowledge of music or of the piano keyboard. [From BlueBookOfPianos.com]

According to my mother, neither my grandmother or grandfather ever took piano lessons, nor did my mom's brother. She and her sister took lessons for a short time as children but they never became accomplished players. The joy and entertainment they received from that piano over the years came from the "player" aspect of it. They bought a number of piano rolls and had a variety of music.

I like to imagine that the family gathered around the piano at Christmas and sang along to Christmas carols. But the truth is, I'm not sure if there were piano rolls available for Polish Christmas carols. And I don't know how familiar the family might have been with English carols. It's not likely they would have heard them at church since they attended a Polish Catholic church. But according to the 1930 census, they did have a radio at home, so presumably they would have heard some Christmas songs that way. It's just another of the many things I wish I'd asked my mom about before she died. And I'll hang on to my image of the family gathered around the piano in the parlor because it pleases me to do so.

When I was about 10 or so my grandmother told my mom to take the piano since I was the only one of the grandchildren to show an interest in it. But my mom and dad's house was just a small bungalow with no good place to put a piano. My mom paid for movers to move it to her house anyway and they put it in the only place there was room for it, in the basement. Our basement was "semi-finished" meaning the floor was tiled and there was a single wall dividing the basement in half. But the exterior walls were cinder block, uninsulated, and cold. The basement was lit by fluorescent lights and was always cool and damp, definitely a bad environment for a piano.

I was really excited when we first got the piano and I have happy memories of my mom and I sitting side by side and taking turns pumping the pedals and singing along to the songs (the words were printed on the piano rolls so you could see them as you played -- karaoke 1920's style!). I took piano lessons for a year or so but my heart wasn't in it. I hated practicing in the cool, damp, basement where the spiders were. The piano was badly in need of tuning but my mom said she wasn't going to pay for tuning unless I was going to take my lessons and practicing more seriously. I gave up and once more the piano only got played when we put a piano roll in. As a teenager it provided great entertainment for me and my friends. They always enjoyed coming over and playing the old songs on the old piano. Eventually, the damp environment took its toll on the piano and the piano rolls. The sound got worse and worse and the piano rolls got brittle and crumbled.

Fast forward to the early 1990s when my daughter was about 6-7 years old. One day when she was spending the weekend at my mom's house, my mom asked her if she wanted to take that piano home with her. Mind you, I had the perfect place for it in my house at the time and I would have LOVED to have had it. But did my daughter say, "Yes!" like any other kid would? No.

She said, "I don't think my mom would let me have it."

I don't know why she thought that or said that or why my mom took that as the gospel truth but she did. No one said anything to me about it and the next time I was over at my mom's house I noticed the piano was gone. I asked her where in the world it went and she said, "I gave it to your brother. He had the movers come over yesterday and they took it right out."

To which I said, "Oh mom, I didn't know you wanted to give it away. I would have loved to have it!"

To which she replied, "I asked your daughter if she wanted it and she said she didn't think you'd let her have it, so I gave it to your brother."

I stood there, disbelieving. There was nothing else to be said at that point. I'd always thought of it as my piano at her house. After all, my grandmother told my mom to take it so I could play it. But now it belonged to my brother who never took lessons or showed any interest in it. Oh well.

That piano still exists at my brother's house to this day. 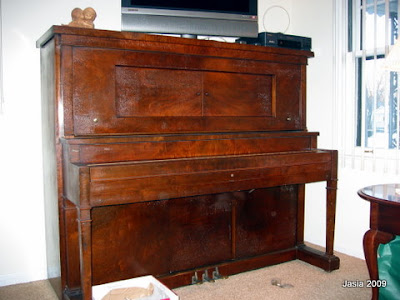 He has talked of restoring it one day but he hasn't gotten around to it yet. The piano's cabinet looks its age but the inside looks pretty well in tact. 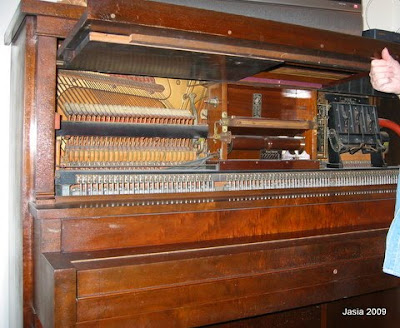 I can honestly say I'm not bitter that my brother has the piano but I sure wish he'd get it restored so I could hear it play again!!!
Posted by Jasia at 8:43 PM