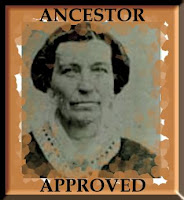 I've been watching this award go around my favorite blogs and hoping that someone would find me worthy of it. I don't always feel this way about blogging awards but this one specifically pertains to genealogy and family history and that makes it all the more special to me. Then in a very short period of time I was given this award by Tim Abbott, Dave Weller, and Pat & Judy. Thank you all! I'm honored and excited to have this award!

The rules of this award specify that the recipient list ten things they have learned about any of their ancestors that has surprised, humbled, or enlightened them. Here's my list of ten things I've learned...

1. I was surprised to learn that my maternal grandfather made not one but 2 trips to the U.S. I don't know how long he stayed the first time or why he returned to Poland only to permanently immigrate 10 months later.

2. I am humbled by the courage it took for my maternal grandmother to leave all of her family and friends and her beloved Poland at the age of 19 and immigrate to America having been given the responsibility of getting a job to support not only herself but her whole family back in Poland.

3. It was in the course of researching my family history that I was enlightened about what it really meant to be of the peasant class in Poland in days of old. Prior to that the only slaves I was aware of were those brought to America from Africa.

4. I was surprised to learn that both my maternal and paternal grandparents were married in the same church in Detroit. Neither of them lived in that area after they were married.

5. I am humbled by the sacrifices my ancestors made to come up with the funds to send their children to America. They had no way of knowing how good life would be for those children and their descendants.

6. In the course of researching my family history I read about WWII and was enlightened about the victims of the holocaust. Before that I didn't realize that Jews weren't the only victims of Hitler and the Nazis, Catholics were victims too.

7. I was surprised to learn that after my grandfather immigrated he kept in touch with his relatives in Poland and that some of those relatives kept his letters and photos all this time. (According to his descendants he never corresponded with family back in Poland.)

8. I am humbled by my grandmother and great grandmother who each gave birth to and raised 11 children without the modern conveniences and medicines we have today. Awesome moms!

9. I was surprised to learn that I have family in German and Sweden!

10. I am humbled by the tenacity and talent of my many ancestors and relatives!

In keeping with my "only three" rule, I'm passing this award on to three very deserving bloggers...

Cheryl at Two Sides of the Ocean
T.K. at Before My Time
Kimberly at About.com Genealogy
Posted by Jasia at 5:05 PM