The Polish Catholic Churches of Detroit, Our Lady Help of Christians 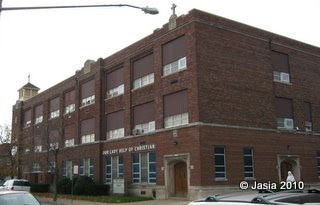 Our Lady Help of Christians once had an elementary school. In 1985 it had 182 students and was run by the Felician Sisters.

Situated between the rectory and the parish hall was a shrine dedicated to the patroness of the parish.

In  November 2006, the parish was merged with Transfiguration and the buildings were sold to a mosque made up primarily of immigrants from Bangladesh. Parish records are now kept at Transfiguration Church, Detroit.

Poem, "How Our Parish Got Its Name" from the 50th Anniversary Booklet...

Many people have asked
How our parish got its name.
I told them that's quite a task,
But I'll try to answer same.

When the parish began to form
They couldn't come to a conclusion.
They argued and put up a storm;
All it was, was mass confusion.

A saint was picked by many;
For others, Jesus was their choice.
Some couldn't think of any;
Finally, Our Lady, they chose, all in one voice.

Our Lady Queen of Apostles, that's beautiful for sure,
But only twelve would be her concern.
That figure is quite demure;
For a bigger Patroness they did yearn.

Queen of Prophets, Angels, Martyrs, and Patriarchs,
They are all very good, no one forgot.
And for so many statues, they'd need a park;
But then Prophets, Patriarchs, etc., they were not.

Queen of Heaven was the best,
Of that, there wasn't any doubt.
But for a patroness on earth was their request,
To take care of all Christians, with a lot of clout.

Suddenly all their thoughts seemed to have clashed,
To have a patroness of all nations.
And in their minds, the same picture flashed,
Naturally, Our Lady Help of Christians.

Some information from "The Polish Roman Catholic Churches of Metropolitan Detroit" by PERC. c. 1985. Used with permission from Michael Krolewski, editor.

"Detroit Church to be converted into mosque" by Kim Kozlowski / The Detroit News.
Posted by Jasia at 2:25 AM