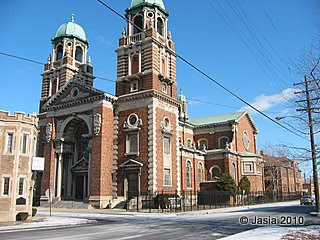 On Easter Sunday, 1890, the first Mass was celebrated in the new church. It was a simple two story edifice with the church occupying the second floor (seating 700 people) and the school on the first floor (300 pupils).

At one time, the parish had 2,000 families registered.

The Souvenir book of the Golden Jubilee of St. Francis Parish, 1890-1940 has been cataloged and is searchable on the PGSA web site.

This parish is alive and well! For more information on the history, current Mass schedule, and ongoing activities, visit the web site www.stfrancisdetroit.org.

The following microfilms of St. Francis church records are available at the Burton Historical Collection of the Detroit Public Library: Film No.1042
Reel 1: Baptisms April 1891-June 1911
Reel 2: Baptisms June 1910-March 1918
Reel 3: Baptisms March 1918-February 1931
Marriages January 1916-October 1938
Deaths January 1920-May 1950
Reel 4: Marriages May 1891-1916
"For 95 years, St Francis of Assisi Church has ministered to the spiritual needs of its parishioners. It all began in 1889 when a group of members in St. Casimir Parish petitioned for the establishment of a new parish in the Junction and Buchanan area. In this locale there already was a large influx of Polish families. Permission was granted and work was begun on building a temporary church and school.

On Easter Sunday, 1890, the first Mass was celebrated in the new church. It was a simple two story edifice, with the church occupying the second floor (seating 700 people) and the school on the first floor. At that time there were 300 pupils. The remaining story of the parish is, in a large part, that of the succession of dedicated and self-sacrificing priests.

There was Father Romuald Byzewski who organized the new parish and built the temporary school and church... Father Felix Kieruj who led the building of the present church, convent, rectory and parish hall. His valiant efforts on behalf of the parish undermined his health... Father Alexander Grudzinski who was successful in paying off the huge debt owed on the buildings. Through his efforts the church was solemnly consecrated on June 4, 1929, the first consecrated church in Michigan and only the fifth one in the U.S.A.

Father Sigismund Kowalczyk was the sixth pastor of the parish. He assumed duties on July 1, 1970, in a time of change and challenge, he led his parish in putting into practice the principles of Vatican II, working to foster an even deeper spirit of community and understanding. The present pastor, Father Dennis J. Nowinski, became te seventh pastor of the parish. He assumed his duties on July 2, 1984.

The present church was opened in June of 1905. It is purely Italian Renaissance in design, 230 feet long and 123 feet wide. It has a seating capacity of 1,700. The Detroit Free Press ran a glowing article on June 4, 1905, stating "An impression of singularity, purity and simplicity... The interior of the church is a blaze of light and color, with yellow and gold, reds and blues blending...The great round stained glass window bathes all in radiance..." The interior is a fine specimen of church decoration, conceded by many judges to excel anything of its kind west of New York City."