The Polish Catholic Churches of Detroit, Sweetest Heart of Mary 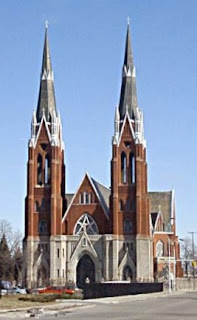 The stained glass windows of the Church are amongst the most magnificent in the city of Detroit, having won an award at the Columbia Exhibition of 1893.

In 1918, the parish registered approximately 7,000 parishioners.

This parish is very much alive and well! For more information on the history, current Mass schedule, and ongoing activities, visit the web site www.sweetestheartofmary.org.

Tour the neighborhood and see current photos of the church.

Sweetest Heart is a State Of Michigan Historic Site.

Surnames of early members of Sweetest Heart of Mary parish are viewable online here.
Already in the second decade of the 1800s, there were isolated immigrant Polanders living in Detroit. With increasing frequency, by the late I 850s, they began to arrive in groups and families. By 1872, some three hundred Polish families had organized St. Albertus Parish and had built a frame church near the outer eastern extremities of the city on St. Aubin and Canfield Avenue (then called Fremont Avenue).

For better or for worse, the history of the Pioneer Detroit Polanders is emblazoned with the name of Dominic Hippolytus Kolasiñski. In 1882, he became the fifth pastor of St. Albertus Parish. A very charming and capable man, he proved to be both a very charismatic priest and a very controversial leader. He rallied his people to build the present beautiful Gothic Church of St. Albertus which was dedicated on July 4, 1885.

Unfortunately, late in November of 1885, trouble and dissension polarized the parish into two factions. Father Kolasiñski was the center of contention. He was removed from his pastorate and suspended from the priesthood on November 30, 1885, for a variety of alleged reasons. Riots and disturbances and mayhem followed. Young John Lewicki, 24, was killed in one such riot on Christmas Day of 1885.

Father Kolasiñski’s adherents would not allow him to leave. Moreover, after consulting a competent canonist, he wrote a letter to Bishop Casper Henry Borgess on December 30, 1885, in which he lamented the latter’s lack of canonical procedure. First, he had not been presented with a document of detailed specific charges made against him. Second, he had not at any time previously received the two requisite warnings concerning any of his alleged irregularities. And third, he was denied due process to protect his person with proper legal representation. That is why he felt his suspension was issued illicitly and invalidly. He felt no man is above the law and that his bishop must follow Canon Law. He rationalized that if bishops fail to observe rules
and regulations, then priests and laity are not required to accept disciplines which contradict the general laws of the Church. That is why he initially refused to leave his pastorate. It was only in early April of 1886, after a judgment of the civil court on March 19, 1886, rendered a verdict in his disfavor, that the priest left Detroit for the Dakota Territory. Here he became pastor of a rural Polish parish of Poznanian and Kashubian farmers near Minto.

In the meantime, Father Kolasiñski’s followers in Detroit, who consistently claimed that he had been unfairly removed and without due process, formed their own parochial community. Already in August of 1886, they had established a school for their children. This was realty the unofficial genesis of Sweetest Heart of Mary Parish. This was the beginning of a community known affectionately in the heyday of the Detroit Polonia as “Sercowo” (The Heart’s Area).

When John Samuel Foley was installed as the new bishop of Detroit on November 24, 1888, Father Kolasiñski returned to the city on December 8, 1888. It was his hope that his case would be reviewed by the new bishop and that a judgment favorable to his person would be rendered. This did not happen. That is why he officially began the Parish of the Sweetest Heart of Mary outside the jurisdiction of the Catholic Church of Detroit. On February 11, 1889, he incorporated it under the title of the Sacred Heart of Mary Parish. Shortly afterwards he began the construction of a church-school building on Canfield Avenue which still stands today behind the church edifice.

Father Kolasinski’s new parish grew so rapidly that already on July 28, 1890, he began the construction of the present cathedral-like church. Tensions between his followers who were called “Kolachy” (the Kolasinskians) and the “Dombruchy” (the Dombrovites) who were the followers of Father Joseph Dombrowski, the founder of the Polish Seminary who had succeeded Father Kolasinski at St. Albertus, continued in their fervid intensity. In fact, on Christmas Eve of 1891, young Joseph Bolda, 19, a Dombrovite, was killed in an altercation between Kolasinskians and Dombrovites.

On June 5, 1892, a cornerstone-laying ceremony presided over by a “bishop” of dubious antecedents took place. On December 24, 1893, Christmas Eve, the church was officially dedicated with great pomp and circumstance by a so­called Old Catholic bishop, Joseph Rene Vilatte, with more than 10,000 people in attendance. Though there was no parade, 1,800 men and women belonging to the parish’s twelve societies and to the two paramilitary companies (organized by Father Kolasiñski), in full uniform and regalia, formed a line around the church. The weather was splendid and the sun shone brightly. The great church, designed by the architectural firm of Spier and Rohns, was hailed as one of the most beautiful Gothic structures in the State of Michigan and as the largest and grandest Polish church in the United States.

During the years when the church was being built (1890-1893), Father Kolasinski made overtures to have his irregular status rectified. In this effort he was successful. After an investigation by the first Apostolic Delegate to the United States, Archbishop Francesco Satolli, Rome ordered Bishop Foley to make peace with Father Kolasiñski and his gigantic parish of some 4,000 families. On February 18, 1894, in a memorable ceremony, he and his congregation were officially received into the Diocese of Detroit. Interestingly enough, however, the parish properties uniquely remained under the control of its own Board of Trustees.

The 1890s were difficult years. A ruinous depression ravaged the nation. The new church which cost $125,000 — a very considerable sum of money in those days — was heavily in debt. In 1891, it was sold at auction for $30,000. After protesting this injustice to the courts and after securing a loan through the Montreal branch of the Bank of England for $65,000, the parish “repurchased” its own church for $45,000. To do this, many families mortgaged their simple neat homes which they built in the very shadow of this tremendous edifice. Such was their devotion to their parish!

All this turmoil took its toll. As it must to all men, death came to Dominic Hippolytus Kolasinski on Easter Monday, April 11, 1898. At 59, he went away to give an account of his stewardship to his God. His was a great funeral. The papers said 35,000 Detroiters came to pay their respects as he lay in state in the great church which became known as “The Kolasinski Church.” Over 10,000 of them participated in his funeral. The great affection which the Pioneer Detroit Polanders had for him can be gleaned from an article found in a Detroit Polish publication of that day (Swoboda — April 15, 1898).

“When his friend, Rev. Romuald Byzewski (pastor of St. Francis Church), appeared on the pulpit, the people wept so audibly that the preacher himself could not be heard. . . . He reminded them of the days of triumph and tragedy they had traversed with their pastor. He urged them to continue to nurture in their hearts, to their dying day, the love which they so sincerely were manifesting toward their pastor on this day of his funeral. . . . At the closing of the casket, the weeping and wailing of the people became so general that tears were observed in the eyes of even those clergymen who, while the lamented pastor was still among the living, could hardly have been called his friends.”

The Detroit daily German newspaper, Die Detroiter Abendpost, made some pertinent comments about Father Kolasiñski’s funeral. They give an insight to the character of this charismatic priest and controversial personality whose absolutely fascinating story has yet to be told in its entirety. Here is the last paragraph, translated from the German, of that newspaper’s account of Father Kolasiñski’s funeral on April 13, 1898.

“It must not be thought that only Polanders participated in the funeral and burial, or that only Polish people visited the church in the course of these last days in order to have a last glance at the well-known features of Dominic Kolasiñski as he lay in death. People came from all parts of the city; rich and poor, people of all nationalities, Detroiters all, they came by train or in carriages or on foot to Canfield Avenue and Russell Street. Some came out of curiosity; others came out of sympathy for a man who played such a great role in this city for more than sixteen years. Yesterday and today, they made many demonstrations in honor of the memory of this famous priest whom today we have consigned to the earth and whose memory will never fade. His story will be told even to coming generations."

Until most recent times, Father Kolasiñski has often been presented as a rogue and a rebel and a renegade. Time, however, heals all wounds, and the passage of time makes it easier for researchers to evaluate such controversial figures as Dominic Hippotytus Kolasinski more dispassionately and objectively. New research, now accessible, may well render a more balanced evaluation of this remarkable personality with such a controversial career. It may reveal the Kolasiñski crisis to have been one of many grays, and not simply one of clear-cut blacks and whites. He may well emerge a vindicated priest and prophet and patriot. He may well have been a victim of the traumatic times of massive immigration and of a hectic period of uncontrolled growth of the Church.

Father Peter A. Baart, a respected church canonist and one of Father Kolasinski’s contemporaries, fittingly remarked in The Evening News of December 30, 1893: “Unfortunately, too much personality and too little charity and regard for the mission of the Church began to be mixed in the case.” Perhaps this best sums up ‘‘the Kolasinski crisis.” May he rest in peace! “Wieczny odpoczynek racz mu dact 0 Panie!”

The text above was written by Eduard Adam Skendzel on the event of the Centennial Anniversary of the Sweetest Heart of Mary Church.