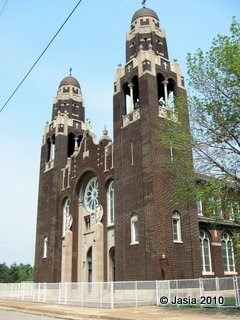 Several years ago, the parish fought to save the church building when the City of Detroit made plans to build a waste treatment center in the area. The church parish continued on until the fall of 2007 when it closed its doors for the last time due to declined enrollment in the parish, the high cost of maintaining this historic church, and a lack of priests.

For more information about this parish visit the Archidiocese of Detroit web site.

A History of St. John Cantius Church in Detroit

"The Polish Roman Catholic Churches of Metropolitan Detroit", by PERC. c. 1985. Used with permission from Michael Krolewski, editor.
Posted by Jasia at 3:27 AM