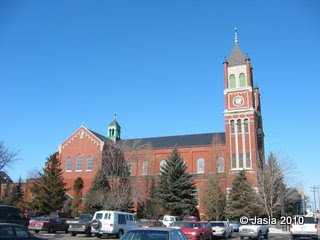 St. Hedwig is home to the West Side Detroit Polish American Historical Society.

Visit the parish web site www.sthedwigchurch.org for more information about this parish.

The Souvenir book of the jubilee of St. Hedwig Parish, 1903-1928 and the Diamond Jubilee book, 1903-1978 have been cataloged and are searchable on the PGSA web site.

An history of St. Hedwig is provided on the parish web site, StHedwigChurch.org.
Posted by Jasia at 2:39 AM