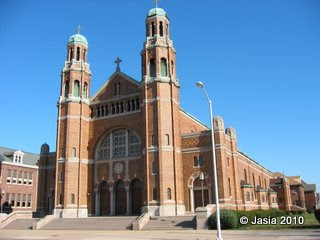 "Brief Historical Facts From the History of St. hyacinth parish (Poletown)
1905 - Rev. Francis Sajecki dreams of forming St. Hyacinth parish. His death delays the project of building a church.
1907 - Committee formed, petitioned Bishop J. Foley, for a new pastor, who appointed Rev. Sylvester Kolkiewicz as Pastor on May 8th. The new church is built during the Christmas Season.
1908 - Work begins on the building of a combination church and school.
1920 - Rev. Francis A. Baweja is named second pastor of St. Hyacinth on January 16.
1921 - The school/church building is enlarged  to make room for the growing number of students as well as the increasing congregation.
1922 - The Parish Committee and Father Baweja receive permission to build the present church. After having three temporary churches, this permanent structure is built. Ground breaking was held on July 4 and the cornerstone was blessed in September by Bishop Gallagher.
1924 - The blessing of the new church takes place on May 24th. The Mollner Organ is also blessed.
1928 - Permission is granted for the painting of the interior of the church. This task takes two years and costs the parishioners $28,500.
1936 - The era of Father Baweja comes to an end with this death on December 26th.
1937 - Monsignor Stephen Woznicki is named pastor of the Parish.
1938 - Monsignor Woznicki is named Auxiliary Bishop of Detroit by Cardinal Mooney.
1950 - The Golden Years of Bishop Woznicki  to an end, when he is named Bishop to the Diocese of Saginaw. Rev. Peter Rypel is appointed Pastor on June.15.
1954 - Father Rypel undertook the task of renovating and redecorating the interior of the church. The project cost $45,000.00.
1971 - Father Rypel retires and Father Francis Skalski is appointed pastor by Cardinal Dearden (July 14).
1972 - The redecorating of the church was completed at a cost of $70,000.00. New lighting was added for $15,000.00 and the organ was repaired for $17,000.00.
1974 - The Golden Anniversary of the Blessing of the New St. Hyacinth Church.

Some information from, "The Polish Roman Catholic Churches of Metropolitan Detroit" by PERC. c. 1985. Used with permission from Michael Krolewski, editor.
Posted by Jasia at 2:56 AM