The Polish Catholic Churches of Detroit, St Thomas the Apostle 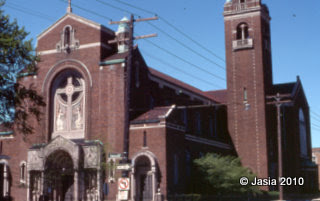 Address: 8363 Townsend, Detroit, MI 48213
Phone: 921-1300
Current Parish Status: Closed in 1989
School in Operation: No
First Year Parish Founded: 1914
Year Church was Built: 1923
First Pastor: Rev. Fr. Patrick Cullaine
Pastor in 1985: Rev. Fr. Lawrence Faris
Mass Schedule in 1985: Saturday 4:00pm (English); Sunday 10:00am (Polish), 12:00pm (English)
No. of Families in Parish in 1985: 168
Percentage of Polish Descent in 1985: 90%
Considered as a Polish Ethnic Parish: Yes
Polish Religious Traditions Preserved: Yes
Location: East side
St. Thomas the Apostle parish was located in the extreme eastern out stretch of the old Polish community. This area was one of the first to experience a rapid change in population as the ethnic residents orginally in the area began to move north along Van Dyke toward Warren and Centerline. In the past, the parish had both a grade and high school in operation.

St. Thomas was a State of Michigan Historic Site.

St. Thomas Church was bulldozed - parts are at St. Hyacinth.

Some information from, "The Polish Roman Catholic Churches of Metropolitan Detroit" by PERC. c. 1985. Used with permission from Michael Krolewski, editor.
Posted by Jasia at 2:28 AM