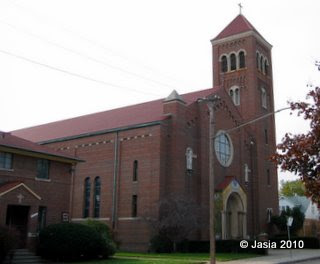 A shrine dedicated to Our Lady of Czestochowa is located directly across from the rectory.

The largest group (1985) of Polish American seniors met at the parish hall each Wednesday.

The parish can be easily reached from the eastern suburbs by taking Mound Rd. into the city. The church is a familiar landmark before coming to the end of Mound.

For more information visit the parish's web site. There is a very nice history of the parish here.