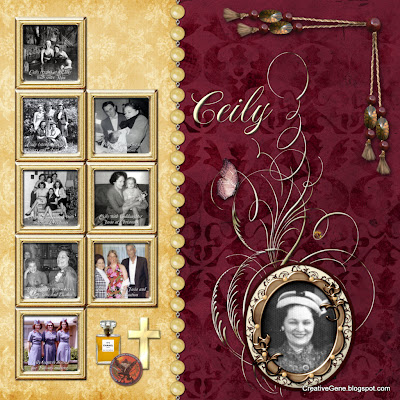 My Auntie Ceily was my favorite aunt. I've mentioned her before in posts on this blog and others but I decided it was time to honor her with an article all her own for Women's History Month. November 2012 will mark 100 years since her birth. I'd say that's a good reason to make this her year to be recognized and remembered.

Cecilia was born on November 18, 1912 to Jozef and Karolina Laska in Detroit, Michigan. She was baptized a few days later, on November 23, at St Francis D'Assisi Catholic Church, in Detroit's west side Polish neighborhood. Her Godparents were Jan Lipa (1st cousin once removed), and Sophia Lipa Soldatek (her mother's sister). She was the 4th of Jozef and Karolina's 11 children, having 2 older brothers and 1 older sister. My father would be born 21 months after her.

Cecilia, affectionately known as Ceily, attended St Francis grade school, presumably through the 8th grade. Like all of her siblings except one (Mary Jane, the baby), she did not graduate from high school. I don't know if she even went beyond the 8th grade in terms of formal schooling. With so many siblings in the house, she was no doubt expected to help out with domestic chores. At the time of the 1930 U.S. Census, she was 17 years old and still living at home. There was no occupation listed for her at that time.

Ceily met the love of her life right in her own neighborhood and she married him in 1935. John Sagovac was born August 11, 1911 in Chippawa, Welland, Ontario, Canada to his parents Eli and Cadie (nee Segecie) Sagovac. He was the second born of their 12 children. The parents immigrated from Nova Gradiska, Yugoslavia, which means they weren't Polish. And they weren't Catholic either. This must have made for a difficult situation for Ceily. She and John applied for a marriage license on September 20, 1935 and were married in a civil ceremony a short time later. I was told by other family members that she and John eloped but I haven't been able to verify that. John was employed as a pattern maker apprentice according to the 1930 U.S. Census. I believe he was in the pattern making business all of his life.

In 1939, Ceily and John had a son (living) and in 1942 they had a daughter, Carolyn (1942-2002). In between the births of their two children, Ceily's mother, Karolina died (September 1940) unexpectedly from a heart attack. A few years later, in January 1949, her father died of heart attack as well. So the 1940s were a decade of births and deaths for Ceily as well as time spent at home raising her family. In March of 1955, Ceily and John had their marriage blessed at Sacred Heart Catholic Church in Dearborn, Michigan. Shortly after that, I was born and Ceily became my Godmother.

The 1960s were a decade of marriages and grandchildren for Ceily. Her son married in 1962 and I believe her daughter married in 1963. From 1963 through 1966 she became the proud grandmother of 4 grandchildren. I believe it was about that same time that she sold some of their property for a high school to be built and she became a city council member. Some of the streets in her residential neighborhood were named for her grandchildren. How cool is that!

In addition to her civic and family activities, Ceily was also a member of the Polish Falcons. She liked to dance and was a good dancer.

Ceily's husband John died in 1977. A few years later, in 1982, she was blessed with her 5th grandchild, a second grandson. Sadly, her first grandson died in 1987.   A couple years after that, in April 1989, Ceily herself died of lung cancer.

I have nothing but fond memories of Auntie Ceily. She was my Godmother and to me she was almost like a fairy Godmother, granting my special wishes. She would always phone my mother before Christmas or my birthday to see what special gift I might like. She gave me some of the best gifts; fancy dresses from Macy's or Nordstrom's in Chicago, the biggest and best Easter basket filled to over flowing with lots of candy... especially chocolate, and one year for Christmas she even gave me a Barbie Dream House! I absolutely adored her.

I remember Ceily as an elegant woman. She had more refined taste than anyone else in the family. My mom said that Ceily once told her that if she saw 2 similar items for sale she would always buy the more expensive one because there was something better about that one. She was a lady who valued quality. She dressed very well and even wore a signature fragrance, Chanel No.5. To this day whenever I smell that scent I think of her. But for all her refinement, she was very down to earth and kind to all. I have nothing but happy memories of her.

Dear Auntie Ceily, I honor you this Women's History Month for being thoughtful, generous, inspiring, and a real class act. You had a positive influence on those around you, especially me, and left us with wonderful memories. You were the woman I most admired when I was growing up. What a wonderful role model you were. God bless you.