When I was a child, we celebrated Christmas on Christmas Eve. That is to say, it was the big event day. My mom spent the day in the kitchen cooking a big dinner. The Christmas tree (always a real one) was put up in the living room about a week before Christmas. My oldest brother spent Christmas Eve day shopping for gifts... he always left his shopping for Christmas Eve. (We always worried if he would be back when the turkey was done or if it would dry out while we waited for him to get home.) My dad typically spent the day puttering around in the garage or at his work bench in the basement.

I was usually on emotional overload from the time I woke up in the morning. I would help my mom in kitchen not so much because I enjoyed cooking but because it gave me something to do. You know what I mean. That was back in the days before video games, computers, cable T.V., DVD movies, etc. when the options for entertaining oneself were limited. So I'd help my mom for a while and then go sit in the living room and stare at the Christmas tree and the few gifts that had been placed under it. I'd pick up each gift that had my name on it and try to guess what was inside. I never guessed right but it was a good exercise for my imagination. After a while I'd get bored and wander back in to the kitchen and ask my mom what I could do. She'd always find something to keep my hands busy for a while.

Eventually my brother would come home from shopping and rush upstairs to his room to wrap the gifts he bought. My mom would grumble that the turkey was going to dry out and would rush around putting all the food in serving bowls. I would get assigned the task of carrying the dishes to the table. I was so excited at that point that I worried that I might drop a dish or bowl. That was the height of my excitement... the moments just before we sat down to dinner. Once we sat down to eat, the evening I lived for 364 days of the year began. As a kid, there was absolutely nothing I enjoyed more than Christmas Eve.

The food was always fabulous (and the turkey was never dry ;-) My mom was a wonderful cook. We usually had turkey and all the trimmings, sometimes a ham too. And kielbasa. Always kielbasa. Both fresh and smoked varieties. Sometimes there were mashed potatoes but more often than not we had pierogi... both the potato and cheese variety and the ones filled with sauerkraut. We had baked sweet potatoes too. I don't remember the vegetables, but I'm sure there were some ;-) Fresh bread was always a staple on our table too. And then there were the desserts. My mom was literally born in a bakery and grew up there too. My maternal grandparents owned the bakery and my mom learned to bake bread, cakes, pastries, pies, cookies, etc. at an early age. She made such wonderful goodies!

Dinner was always just our immediate family. We would all eat quickly with little conversation to begin with. Then when the desserts were served the conversation would pick up and we would linger at the table enjoying the chruschiki (angel wings), cheesecake, cherry pie, three types of Christmas cookies (cut out cookies, spritzes, and "chicken necks"), and best of all, the fruitcake! I have never understood why people make fun of fruitcake. Those who don't like it never tasted my mom's. She always made several cakes in October and put them in the attic to stay cool and let the flavors blend. Of all my mom's recipes, her fruitcake would be the one my brothers and I would most like to have. How I miss her fruitcakes!!!

After dinner my mom would go back into the kitchen and try to figure out where to put all the leftovers (our refrigerator was never big enough). I'd help her by cleaning the table and carrying the dishes to her. As soon as the food was put away and the dishes were done (except for those that had to soak a while), we'd all pile into the car to go see Christmas lights. Back in those days, people didn't put lights on their houses on Thanksgiving weekend. For the most part, you didn't see people putting up their outdoor lights until a week or so before Christmas (usually the same time they put up their Christmas tree). And more often than not, they didn't turn their lights on until Christmas Eve. So driving around to see them was always a much anticipated treat.

No sooner would we all get in the car than either my mom or my dad would realize they'd forgotten something. We'd all groan and wait impatiently while they went back into the house to get it. Unbeknownst to us kids, they would actually be getting the bulk of the gifts out of hiding and putting them under the tree. After we drove around looking at lights for an hour or so, making a point of driving by my aunts' and uncles' houses who lived nearby, we would return home to find that Santa had been to our house while we were gone!

My family was a typical blue-collar, working class family. But when Christmas Eve came around you'd have thought we were rich. There were always a lot of gifts around the tree and to a child's eyes the packages seemed enormous. I always got everything on my Christmas list except the pony. I put "pony" on the top of my list every year but I never got one (as a child I didn't understand about city ordinances prohibiting such things). I did get a bouncy horse one year though and I loved that! I can't find a picture of the bouncy horse right now but this picture was taken at the same time. Yee Haw! 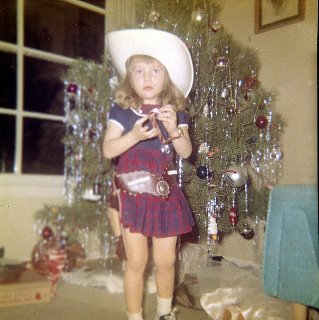 After we were done opening our gifts we would sit around and play with our toys, drink hot chocolate and nibble on ribbon candy, mixed nuts, and these little hard candies that looked just like raspberries. Boy, I haven't seen ribbon candy in years. My kids have never seen it. I wonder if it is still made? Eventually, the excitement would wind down and I'd go to bed.

On Christmas Day we went to Mass and then spent the day at home or occasionally visiting relatives. It was not as fun as Christmas Eve but it was still a nice day with lots of good left overs and all our new toys to play with.

The Christmas tree would be taken down a few days later, usually the day before New Year's Eve. My mom's rule was that the tree had to be taken down before we welcomed in the New Year.

It's so nice to have those happy childhood memories to share with you. Unfortunately, those aren't my only memories. My father was a mean drunk and he always had to have a drink at Christmas (and New Years). Unfortunately, it never ended with one drink. One led to another and another. There aren't too many of those wonderful Christmases that didn't end up with my dad beating the heck out of my mom. As a child with limited options I was forced to witness it and helpless to do anything to effectively intervene. I loved my dad and when he was sober he was a reasonable and nice guy. But when he drank he was as mean as they come. I debated about whether to mention the ugly part of my Christmases in this post, but if I didn't my retelling of things would have amounted to deception by omission. If I'd only told the pretty part of the picture that would not have been honest.

Back in those days, divorce was not an option for Catholics. And things like spouse abuse were never discussed. It was our family's dirty little secret. Except that it was never a secret. The reason we celebrated Christmas with just our immediate family is because my dad had been thrown out of most of his siblings' and all of my mom's siblings' houses over the years. They were fed up with his drunken nastiness and forbid him to come over on Christmas Eve. When we did go to visit with family on Christmas Day it would only be long enough to have a drink (yes, they knowingly contributed to the situation by offering him a drink "because it was Christmas") and then we'd be hurried out the door. After a few visits he'd be lit up, we'd return home, and my mom would end up the target of his drunken rage. Again.

I wish I'd had a Normal Rockwell, Donna Reed, or Ozzie and Harriet family, but that was not the case. No, we were a dysfunctional family with lots of warts and thorns in our makeup. It's a tough call when recording one's family history to decide what to include and what to omit. I was always told not to speak ill of the dead. And maybe I shouldn't be writing about my dad this way. But on the other hand, maybe someday my children will read this and gain some insight. Maybe there's someone out there reading this right now who has a drinking problem and will realize how their drinking impacts their family and how their ugliness will be remembered.

I'm not bitter about my dad's drinking and his violence against my mom. Perhaps I should be but I've long ago forgiven him. Now I try to remember only the good times and for the most part I'm successful. It serves no purpose to taint my current Christmas spirit by dwelling on the dark side of my childhood Christmases. I'll pray for peace on earth and hope that no family will have to face the ugliness of fear and violence in their own home at Christmas.

May your home be blessed with joy and happiness and be violence-free this holiday season.

No Polish family's Christmas tree is complete without a pierog! (Pierog is the singular form of pierogi.) Here is a picture of the pierog on my Christmas tree. I bought this ornament several years ago at a Polish import store in Detroit. It's the ornament on the lower right. (Pierogi is the Polish version of ravioli.) The ornament in the upper left of the picture is one made in Poland, it's vibrant colors and glitter make it stand out on the tree. I bought this last year after Christmas at a women's clothing store. You just never know where you'll find treasures!
Technorati Tags:Christmas|memories|Creative Gene|Jasia
Posted by Jasia at 3:17 PM